Well, not so much.  I came to California, I saw the place, but I can only say at this point that I merely survived the experience.

We left Port Orford, OR at 6 AM yesterday morning and, after a series of rest stops to water and walk the dogs and to dewater and walk the humans, we arrived in Dublin, CA at 6 PM.  Ugh!  I had intended to let Juanita drive some of the way to break up her ride along boredom and to give me some rest from behind the wheel.  Being the macho man that I am, I drove the entire way.  Ugh again. 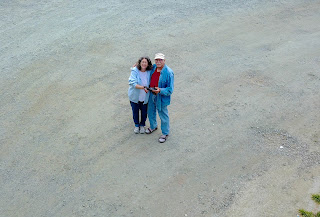 A "dronie" taken at our first rest stop in Oregon... 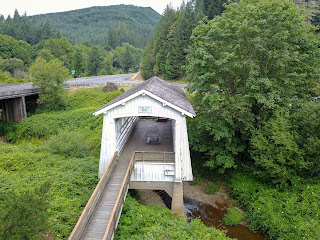 At the Sandy Creek covered bridge

Few surprises arose during the drive, except for the substantial remaining snow fields on Mt Shasta in CA and the almost full appearance of Lake Shasta.  The usual assortment of moronic drivers pushed us from the rear (no, I am not a poke-along geezer) and dived in front with death defying moves.  I kept my verbiage civil...not...and didn't make any threatening gestures during these encounters despite the urge to do so.

Just as luck, and timing, would have it, we arrived in the northern part of the SF Bay Area right at rush hour giving validity to our decision to leave the place over eleven years ago.  I can't even comprehend how I put up with this day in and day out insanity for years.  Oh, the humanity!!

After making all the right turns at the right time (memory served me well), we arrived at the LaQuinta Inn in Dublin to rest up a little and feed the pups and ourselves.  Juanita left me with the furry critters to see her daughter for a short time before we all crashed for the night.

Since all family members are still employed and had to work today, Juanita and I decided to visit with our old (or I should say former?) neighbors in Castro Valley.  We spent about four hours with these good friends and found the old neighborhood relatively unchanged except for cosmetics on some homes and degradation of others.

Unfortunately, during our old neighborhood visit, our little Beagle girl Luna rolled in something very odiferous...I don't even want to know what it was.  As a result, Juanita decided to take the two furry critters over to her daughter's house this evening in order to cleanse the foul creature. 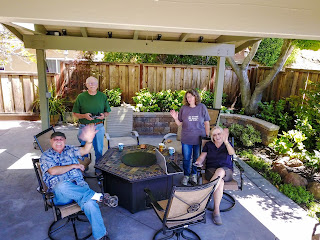 "Dronie"with our friends Tom and Vicki

I have seen more humanity in just an hour here than I see in Port Orford in a year and would like to say that I can survive the next two days of our California visit with no problem.  I put the chances of that at fifty fifty, but who knows.  By the time of our departure Monday morning, I might be able to proclaim with certainty....Veni, Vidi, Vici.  Or not.