The sun finally came out...yesterday!  And then, not so much today.  Oh well.

The park was packed solid for the Memorial Day holiday weekend and forty mile Long Beach Peninsula yard/garage sale.   We joined the bargain hunting pack on Sunday and picked up a few pieces that needed a new home.  Most of our purchases were items for our friends, but Juanita found an antique quilt that was in pretty rough shape and needs a lot of TLC.   I managed to leave everything in the yard or garage.

Fedex arrived on Wednesday with a nice new flying machine to add to my ever growing fleet (this is Juanita, the editor:  "ever growing fleet"...I don't think so!) of quadcopters.  I have already made five flights with the DJI Phantom 3 Professional, which is an amazingly stable platform for both videos and still photos.

My previous Phantom 2 Vision is stabilized by up to only 12 GPS satellites, whereas the new quad can access more than 20 at times.  That, in addition to a new visual/sonar near ground positioning system, makes for an almost tripod like aerial stability.  The short video below shows some of that solid performance at the beginning, which appears to be a still photo.

I also took a few still photos with the new camera.  The first one is a fun dronie at our little space at Andersen's RV Park and the second consists of five shots bracketed and processed into a single HDR photo.  The new camera is able to capture single, multiple, bracketed, time lapse and long exposure photos and will require a lot of practice to get things right. 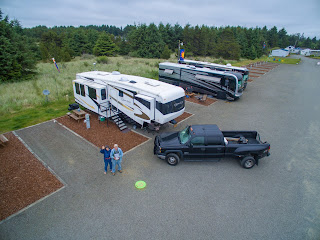 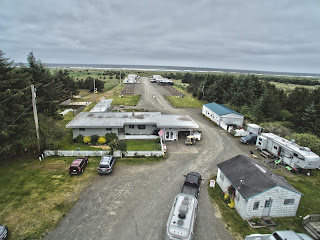 Good long time friends Mike and Charlie Harris visited with us briefly earlier this week.  We haven't seen these two good people for many years after meeting them originally in early 2007.  After trading stories in our rolling home for a while, we adjourned for a great lunch at the Lost Roo restaurant in Long Beach.  Good company, great food...we couldn't ask for more.

Yesterday we drove down to Ilwaco for the weekly farmers market.  There was very little produce available, but we loaded up on other stuff...again mostly for friends and family. 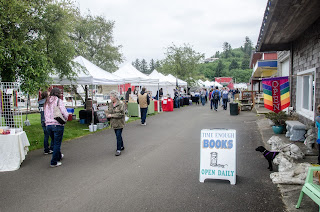 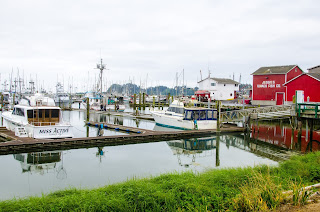 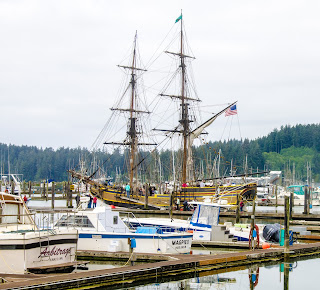 At the marketplace in Ilwaco...the Lady Washington was in port.

Despite the almost constant overcast, we are enjoying our visit to Long Beach.  The upcoming July 4 holiday is still ahead before we head south, and we are looking forward to more fun activities on the Washington coast.

Bring back the sun!

Well, we have been in Long Beach, WA for nearly two weeks now and the sun has all but disappeared.  Don't get me wrong.  We are enjoying our visit very much but would dearly love to get a little vitamin D.

As usual, Juanita is quilting her little hands off and I am doing pretty much what I always do.  Reading, exercising the two Beagles, maintaining RV systems, flying quadcopters and a kite, processing photos and videos,  bitching about political events and watching people come and go are the activities that generally consume much of my time these days.  Retirement is sure tough!

Things are fairly quiet at Andersen's RV Park, but I expect things to pick up soon with the Memorial Day holiday ahead.  Party time!  There will be a 40 mile long garage sale over the weekend in addition to all the usual holiday activities, and I expect a lot of people watching opportunities for entertainment purposes of course.

The weather here started out pretty decent but has fallen into a real rut of daily overcast with light to heavy mist at times.  The ten day forecast calls for the same with the exception of "partly cloudy" conditions tomorrow.  You would think that NOAA could use the word "Sun" somewhere in their forecasts, but I guess that's too much to ask.

The temperature range has fluctuated between 52 degrees in the morning to a balmy (haha) 54-58 in the afternoon before the unseen sun sets.  OK, I'll admit to getting a bit snarky here, but I'm a big fan of the big bright shinny orb that usually occupies a place in the sky, and I become very grumpy when I don't get my way.

I managed to find a short break in the mist and clouds and put the DJI Phantom 2 Vision quadcopter in the air to capture a quick video of the area around the park.  Upper level wind caused some video shudder, but I managed to put something together regardless.

We will make a day trip into Oregon tomorrow and do some shopping in Astoria and Warrenton.  Hey, we might even see the sun for a few minutes!

An uneventful drive of 158 miles brought us north from Newport, Oregon on Wednesday and left us on the edge of a beautiful loooooooonnnnnnnngggggggggg drivable beach in Long Beach, Washington.  The place is aptly named. 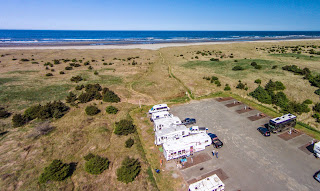 A short trail takes us from rig to the beach.

We pulled in at Andersen's RV Park soon after 1 PM and did the basic set up on our rolling home in short order.  On Wednesday we put out all the utilities, set up the DISH satellite antenna and mounted the Davis Vantage Vue weather station on the roof ladder.  On Thursday we completed the outdoor set up process by putting up our deck and steps, putting the Green Mountain Grill Davy Crockett BBQ together and getting the amateur radio antenna put in place and my station on the air.

We have previously visited Andersen's for a couple of one week long periods but will stay for two months this time.  The park is essentially a very large gravel parking lot with rows of back in spaces on each side.  Wide grass strips are located to the rear of each lot and the spaces are separated by narrow cedar bark filled areas.  The sites are quite close together but the grass strip and area of natural vegetation at the back makes the space feel larger. 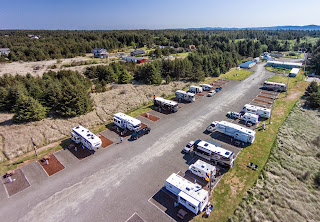 Another view of Andersen's RV Park.

The park has all the usual amenities and the hosts are very friendly and knowledgeable about the area.  All facilities are a bit long in the tooth but very clean and adequate for our needs.  The park layout seems to facilitate friendly interaction between the guests and just about everyone that passes has something to say, even if to just say hello.

View to the southwest of the park.

The weather since our arrival has been fantastic with moderate temperatures and only light wind.  Partly cloudy conditions Wednesday and Yesterday gave way to clear skies today.

The wind was light enough this morning to allow me some flying time with the DJI Phantom 2 Vision quadcopter, and I took a series of photos to show a little of our home for the next two months. 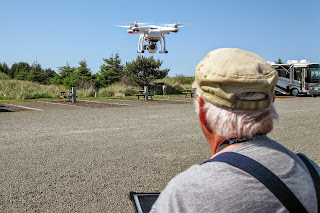 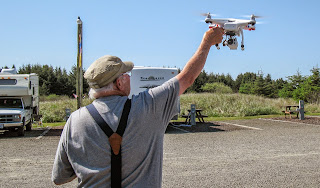 Grabbing my aerial photo platform from the sky.

Juanita got her quilting station going today and already has two projects on the agenda.  She is making a real quick baby quilt for a neighbor of her Mom in California and has started on a quilt to enter in the July 4th contest in Port Orford, Oregon.  She will ship that quilt to a friend who will handle the entry.

Our little furry buddies just love the beach and surrounding area.  They spend a lot of time outside, proving again that tired Beagles are good Beagles. 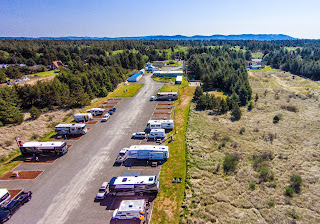 Several very fine days have passed since our arrival in Newport, Oregon, and we are ready to move along again.

The first two days were very windy, which was just fine with me.  I didn't feel like I was missing anything outdoors while watching NASCAR races on TV.  Yesterday and today, however, have been absolutely beautiful...just perfect for spending quality time along the central coast of Oregon.

Of course any "tour" wouldn't be complete until Juanita checked out the two quilt shops in town.  She  found only a couple of items she couldn't do without and I considered myself lucky with that outcome.

We visited the Yaquina Head Lighthouse area yesterday afternoon and enjoyed the fantastic views and interesting wildlife.  While watching whales offshore, a flock of pelicans passed by almost close enough to touch.  A pair of peregrine falcons defended their cliffside nest with loud screeches and sea lions played in the surf.  We couldn't have asked for more. 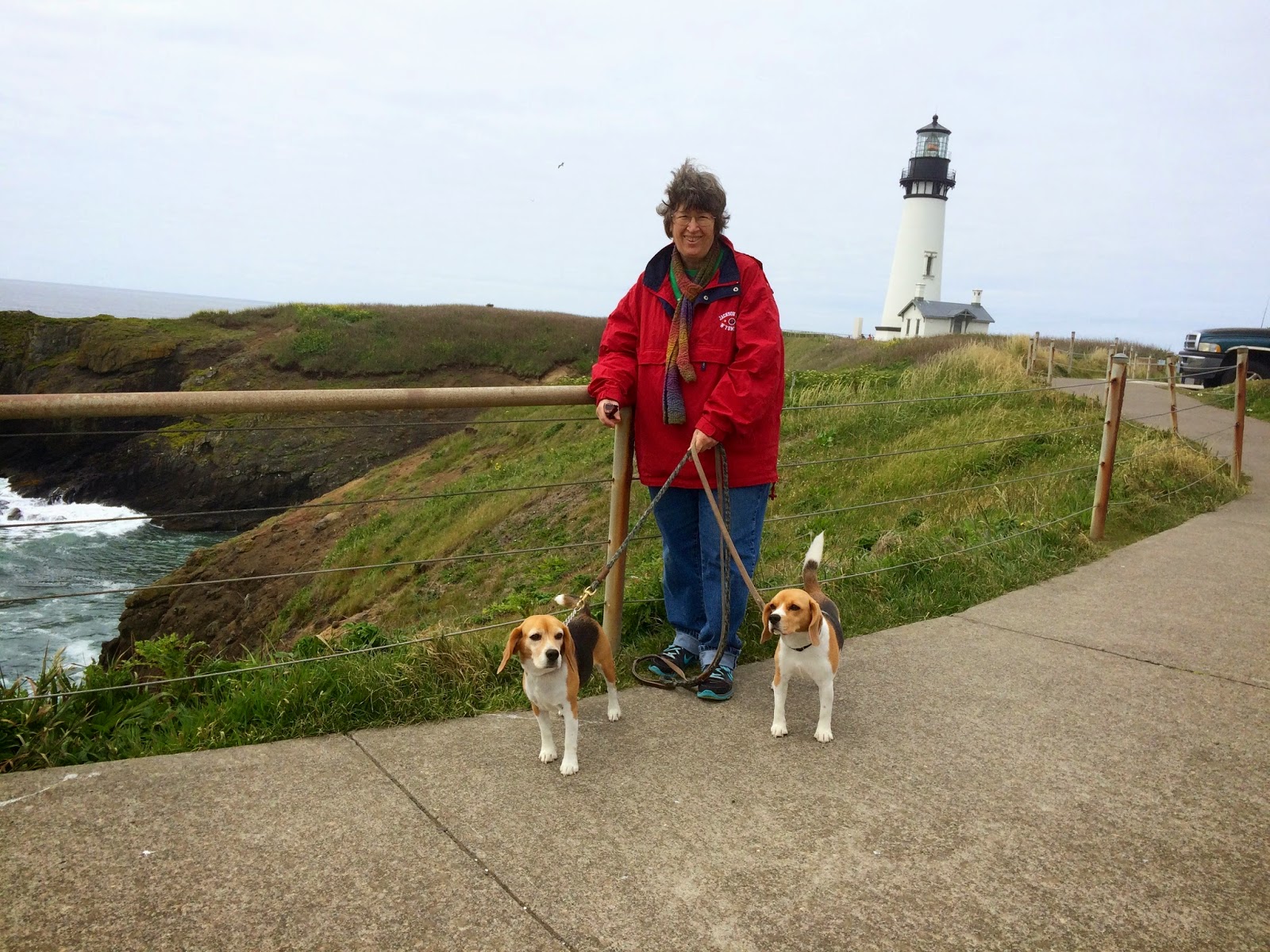 Juanita and the "girls" at Yaquina Head

Today we took a drive up to Otter Crest, Depoe Bay and Boiler Bay.  Large waves were pounding coastal rocks and creating quite a show for tourists at the many viewpoints along the highway. 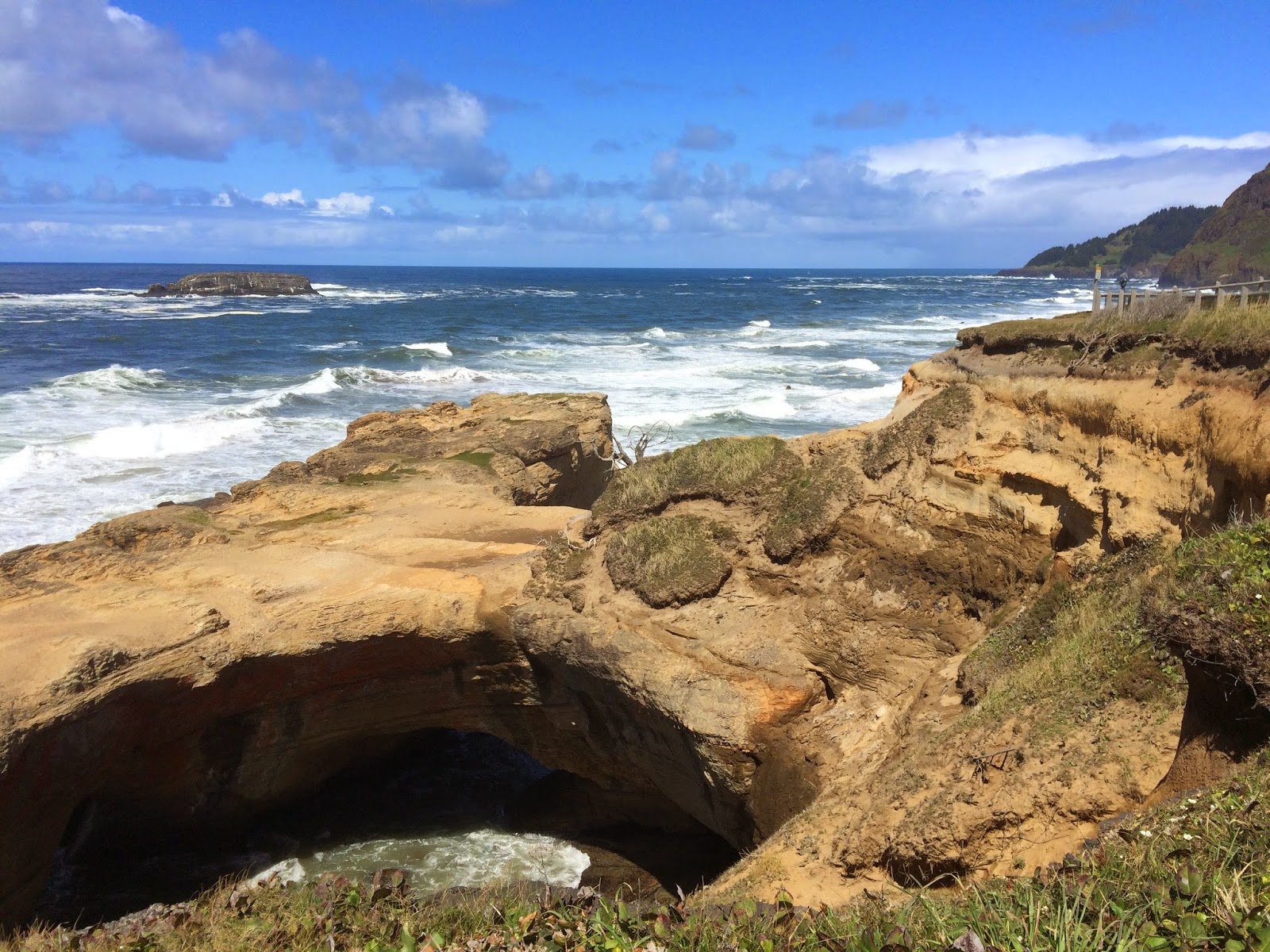 Our diets were cast aside for a day so we could enjoy a lunch at my favorite eatery along the coast.  I have been visiting Gracie's Sea Hag since my college days at Oregon State in the 1960's and seldom pass through the area without ordering up a bowl or a cup of chowder followed by a basket of salmon fish and chips.  I will pay the price by cutting back for the next few days, but it was well worth it. 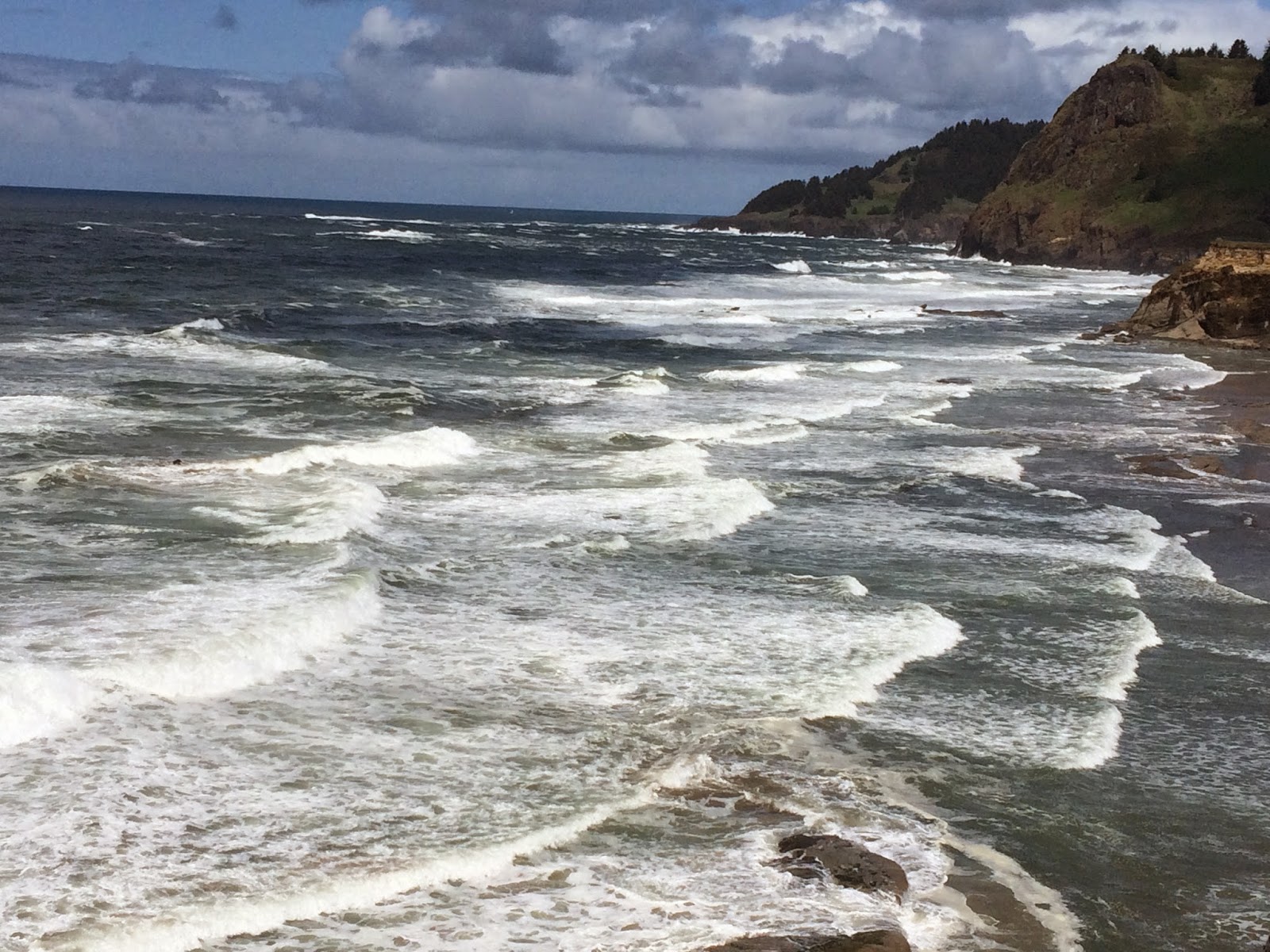 A fairly heavy surf along the coast today.


Our two furry friends have enjoyed their Newport area visit as well, with all sorts of new aromas and interesting stuff to sample from the ground level banquet table.  I don't really want to know what they find to eat, but they find it quite palatable. 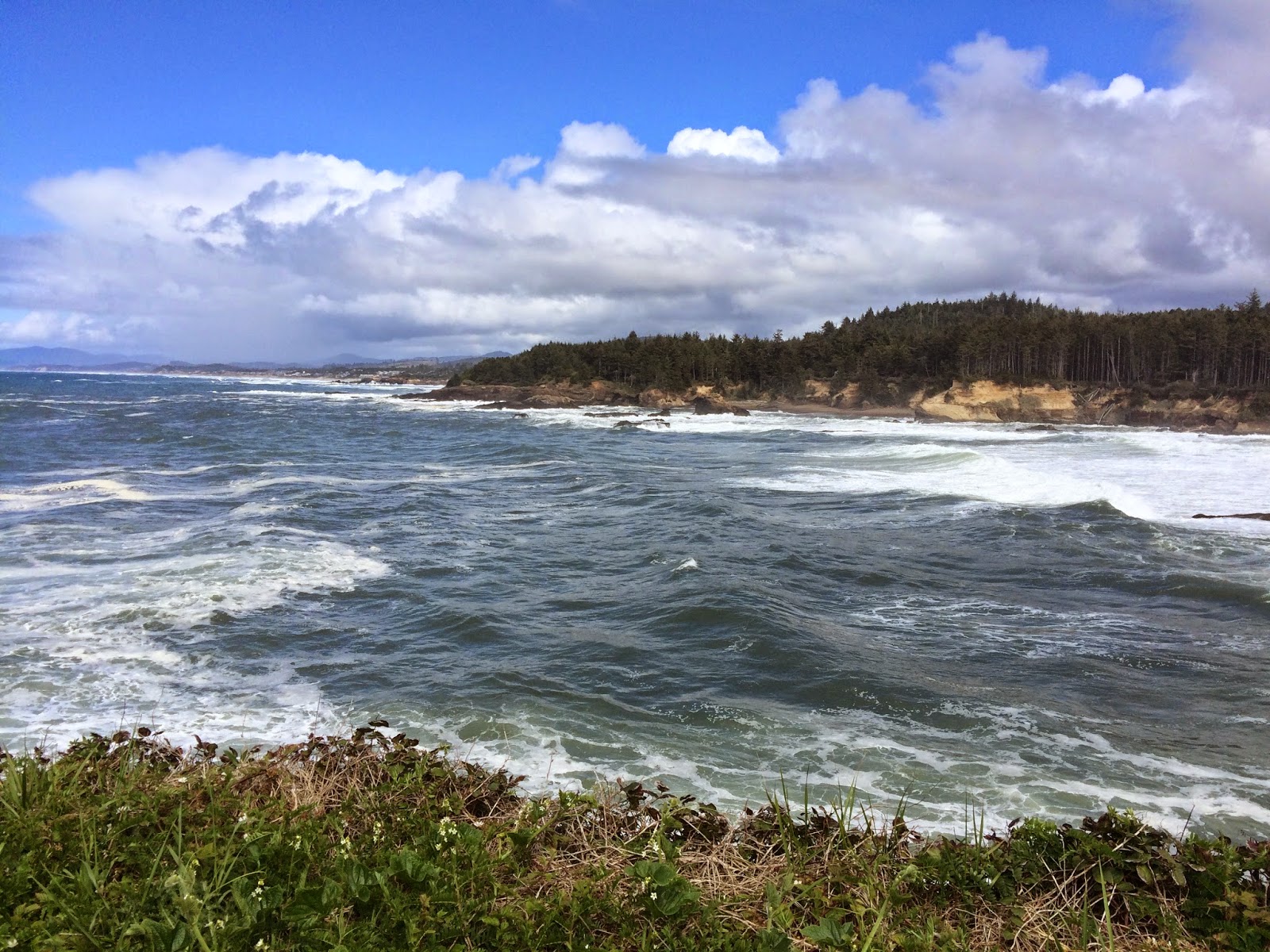 
We will put another 150 miles behind us tomorrow and stop in Long Beach, Washington for a two month visit.  I'll check back in with you after getting set up at the beachside RV park.
Posted by Unknown at 5:46 PM 2 comments:

Well, it has been a while since the wheels have rolled on our little roving home.  In fact, we arrived in Port Orford on May 1 of last year.

Despite the fact that it has been an entire year since we have packed and prepared the fifth wheel trailer for travel,  our mental check lists were fully operative and we didn't seem to pass up any necessary tasks.  It went far smoother than I expected.

We left Port Orford at a rather civilized time at just past 9 AM and arrived at the Port Of Newport RV Park at 1PM after  an easy and uneventful drive up the Oregon coast.  The 147 mile drive was well within our usual maximum daily range and we got everything set up and fully operating in very short order. 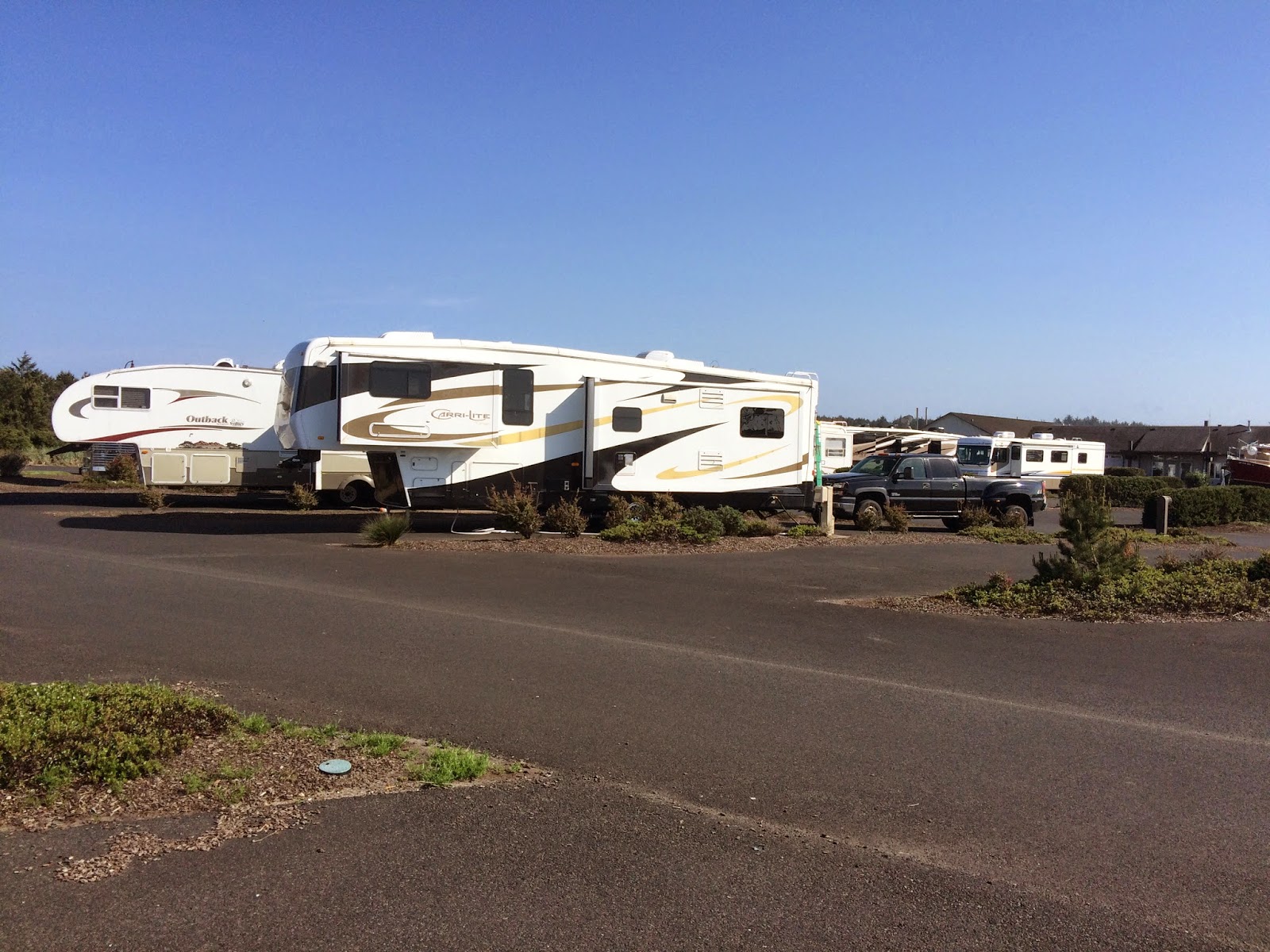 All set up in Newport, Oregon

The weather was almost perfect for the short drive, except for a stout headwind of about 25-30 MPH. The wind speed continued to increase after our arrival in Newport and I was nearly blown off my feet during the last outing with our two furry friends.

We have previously visited this park, which is essentially a large parking lot with long spaces located between narrow planted strips of native coastal vegetation.  Interior roads and spaces are all paved and we have all the usual RV park stuff including decent cable TV and marginal WiFi.  We will remain for five nights before moving another 150 miles north to Long Beach, Washington.

My expectation that hauling the big heavy trailer down the road after a long layoff would be uncomfortable at the very least was unrealized.  Well, at least I didn't run over or hit anything!  Traffic was light and I fell back into the towing routine instantly.  It felt like I had done this just last week.

We plan to spend time checking out the sights in the area and I will be back in a day or two with photos and, if the wind would ever stop blowing, possibly a nice aerial video.  We'll see............
Posted by Unknown at 4:55 PM No comments: