A big storm in Port Orford on Saturday made national news and, as usual, was somewhat overblown in the reports.  It was a very destructive event locally, but the wind and high waves did not cause an evacuation of the entire town.

The dolly dock and port area were evacuated for a time during the peak of the morning and early afternoon storm, but boat owners and port personnel were allowed back later to assess the damage and make repairs where possible.

The wind far exceeded forecast and, unfortunately, came during a very high tide.  I recorded a nearly 76 MPH gust on my hand held wind meter at a dock overlook downtown and peak winds of 93 MPH were seen at nearby Cape Blanco. 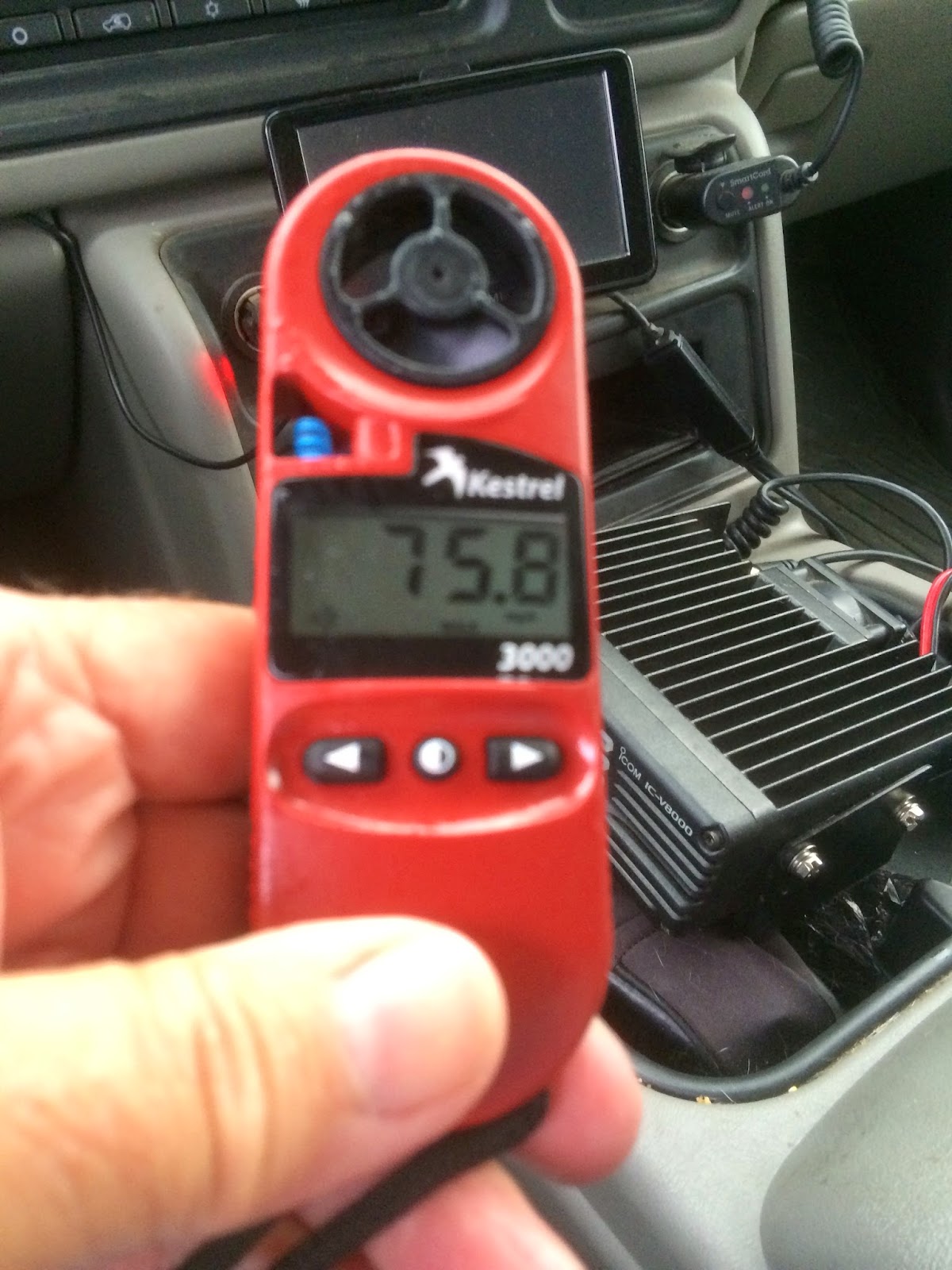 The dock itself was overrun by nearly 30' waves on top of a 7.3' high tide.  Hallmark Fisheries at the end of the dock was washed into port waters and onto the nearby beach.  A 60' long section of the rock jetty was pretty much destroyed, the sewage pump and boat fuel systems were damaged, a good amount of dock equipment was washed away and Griff's On the Dock restaurant was badly damaged by the waves.  As a result, Curry County has made an emergency declaration request to the state. 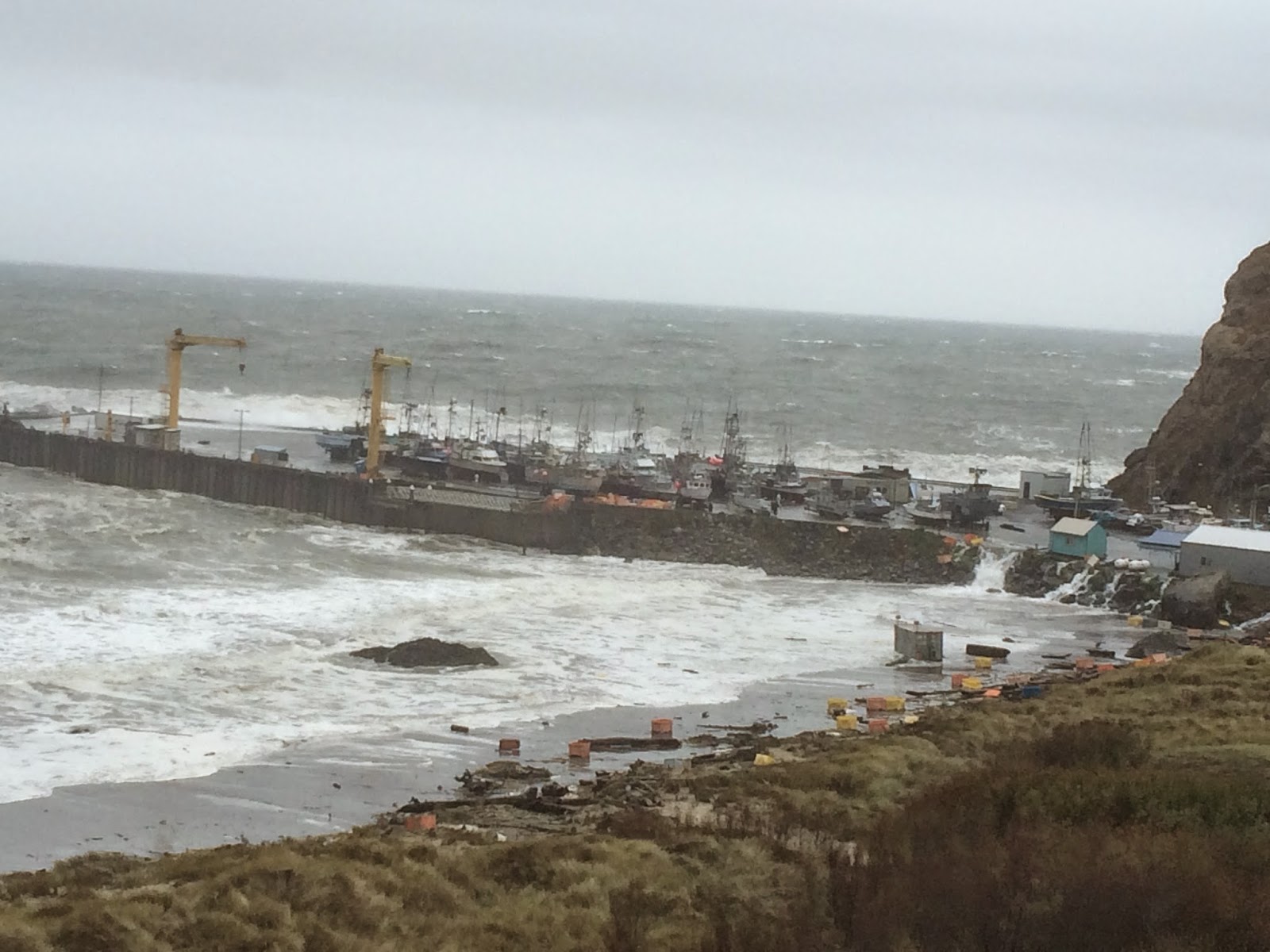 Waves washing equipment from the dolly dock.  All sorts of debris ended up on Dock Beach.  The waterfalls on the right of the dock are from the waves washing up on the dock.  No boats were damaged. 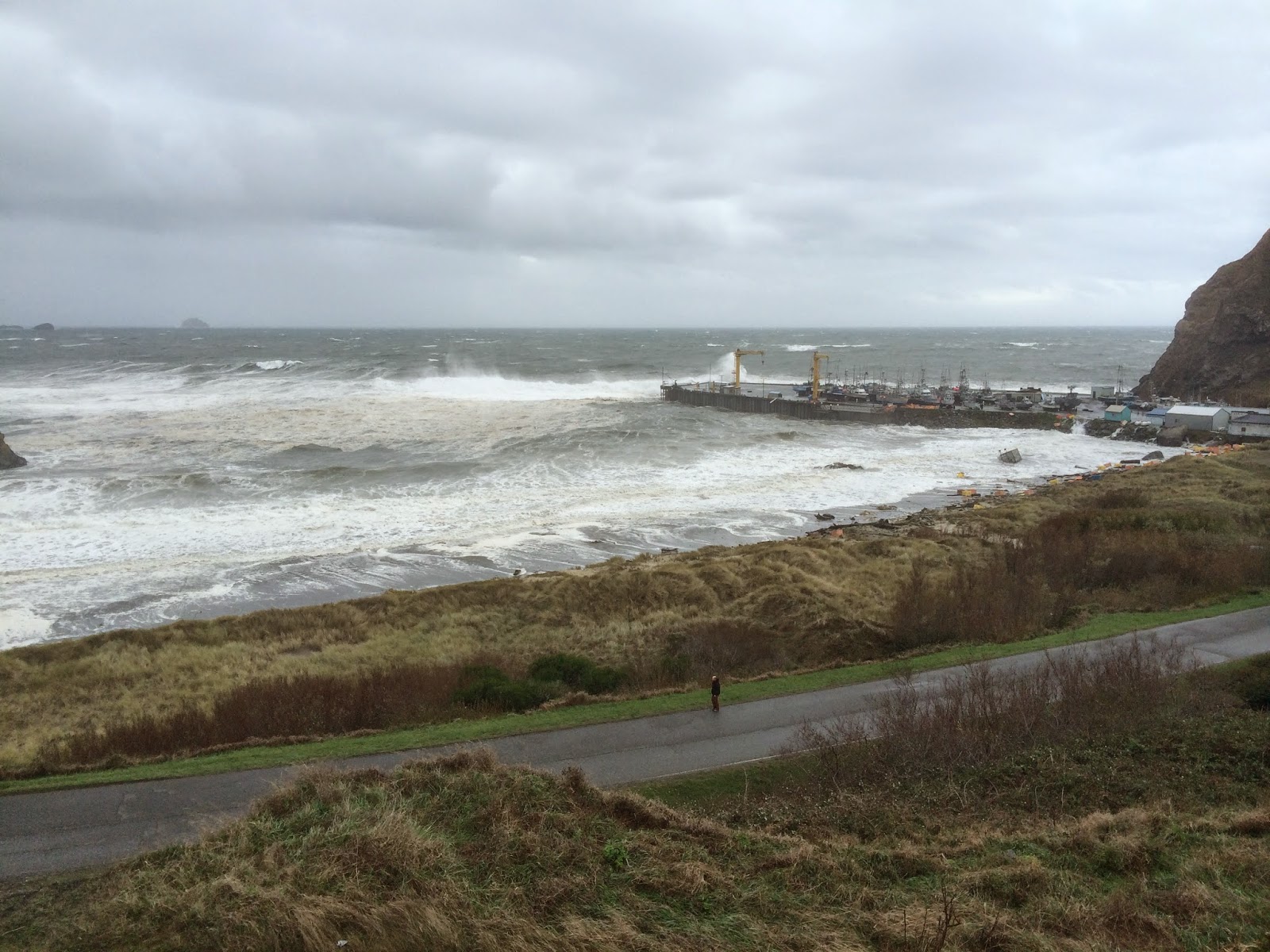 Waves completely covered the rock jetty on the left of the dock. 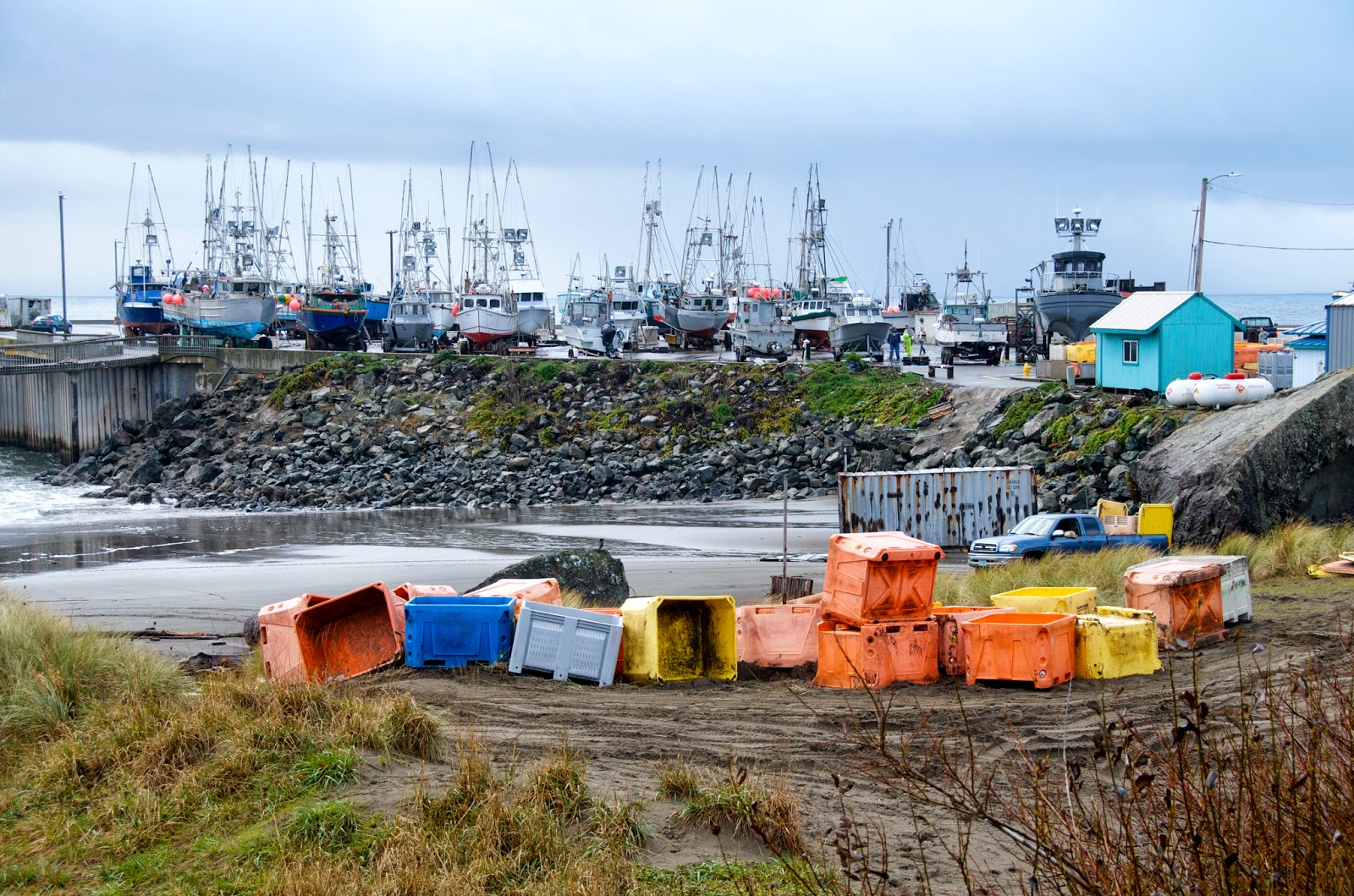 
Fortunately, nobody was injured in the storm, but the town itself was not entirely free from damage.  One wall was blown out of an old empty law office and a patio removed from an old closed cafe.  An RV park located about a quarter mile away from our park was heavily damaged by falling trees, which destroyed two older model RV's.  One of the rigs hit by falling trees burst into flames and ultimately destroyed by the explosion of an oxygen bottle kept inside for medical purposes.  We felt and heard the explosion in our rolling home...the dogs were fairly upset by that as you can imagine. 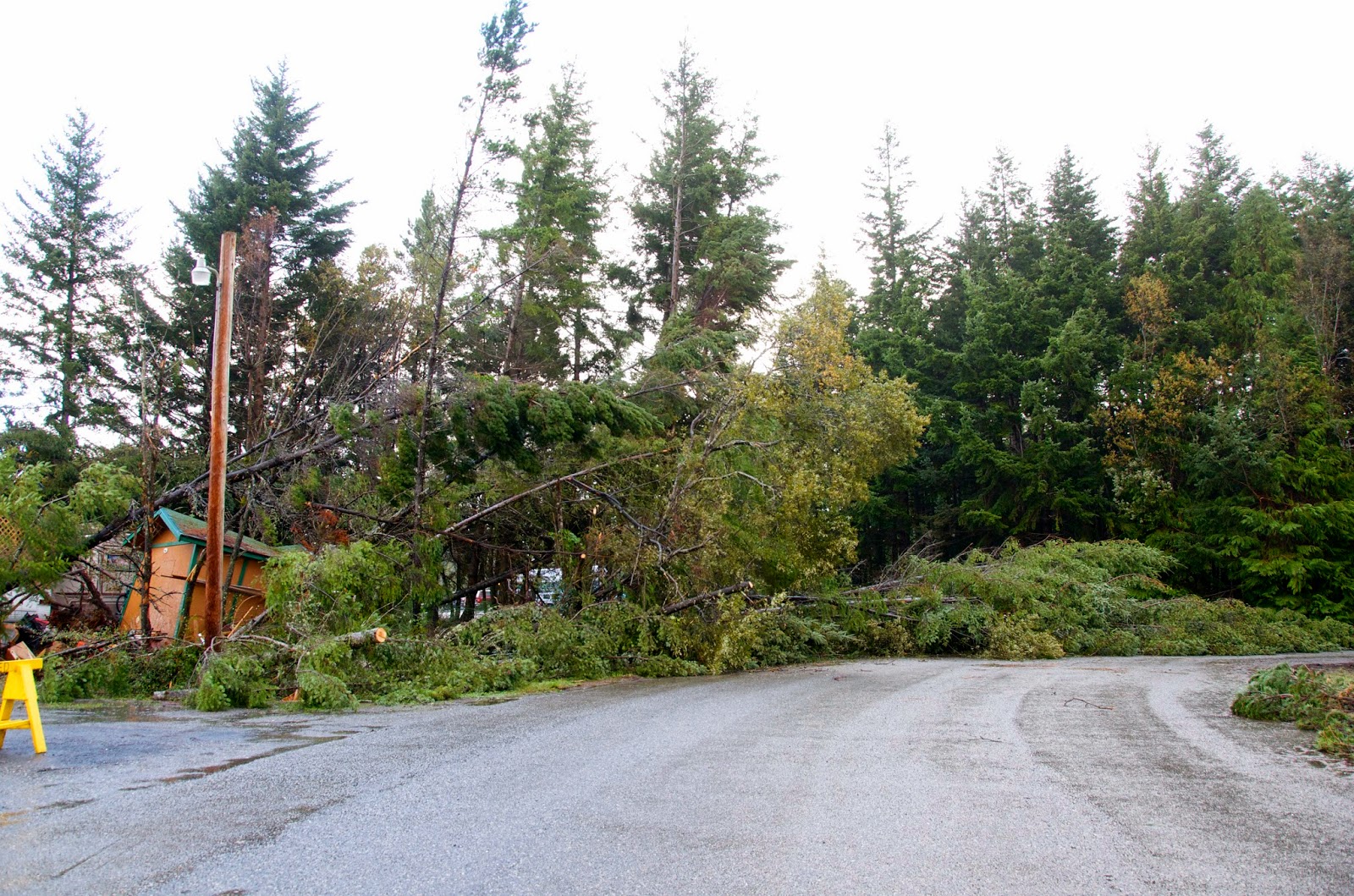 Trees blown over the roadway at Madrone 101 RV Park. 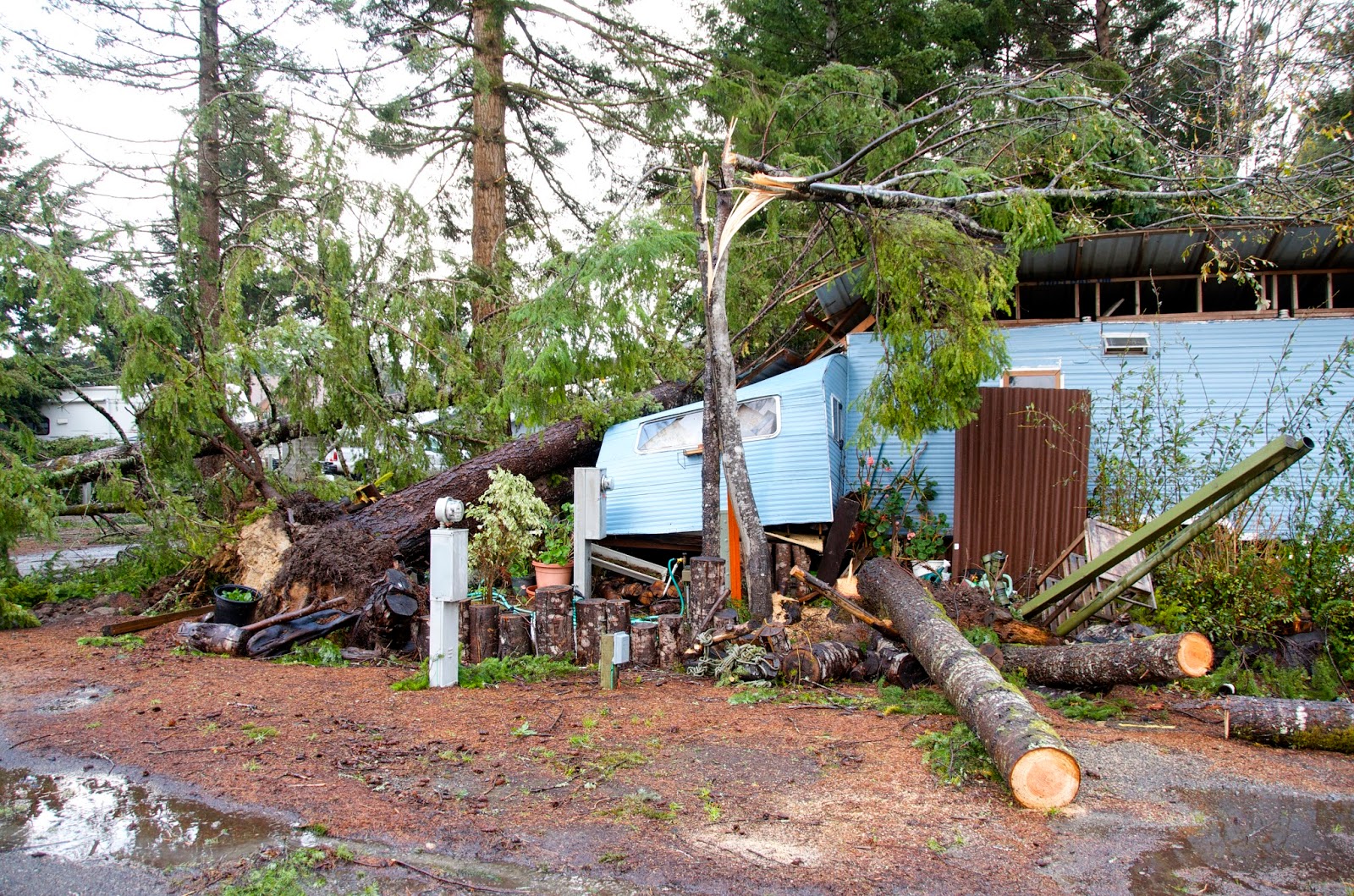 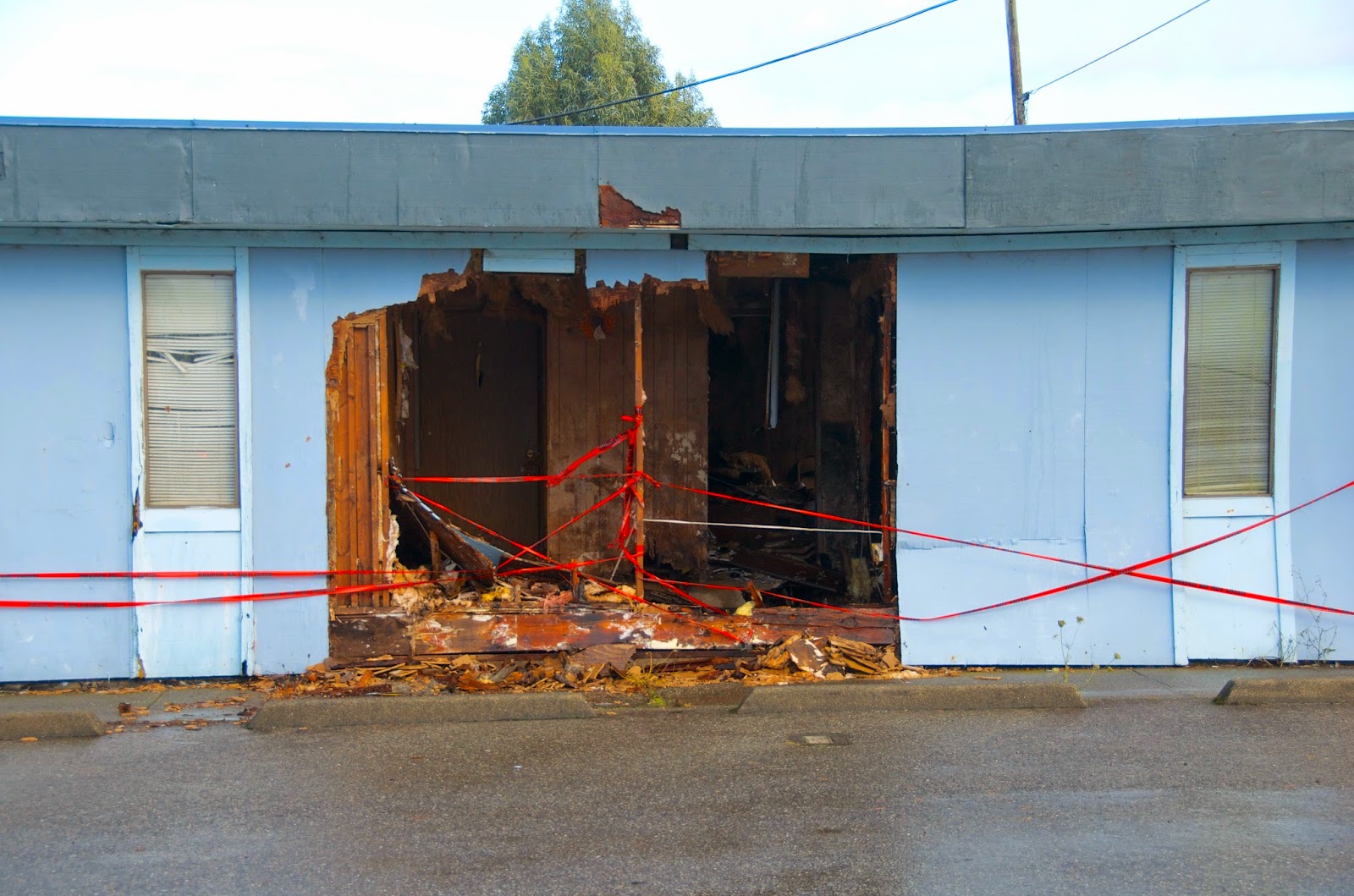 A wall was blown out of this old empty law office in downtown Port Orford.


Damage at our park was limited to a limb that fell on the car of one of the residents.  The limb was partially supported by a power line preventing serious damage to the car. 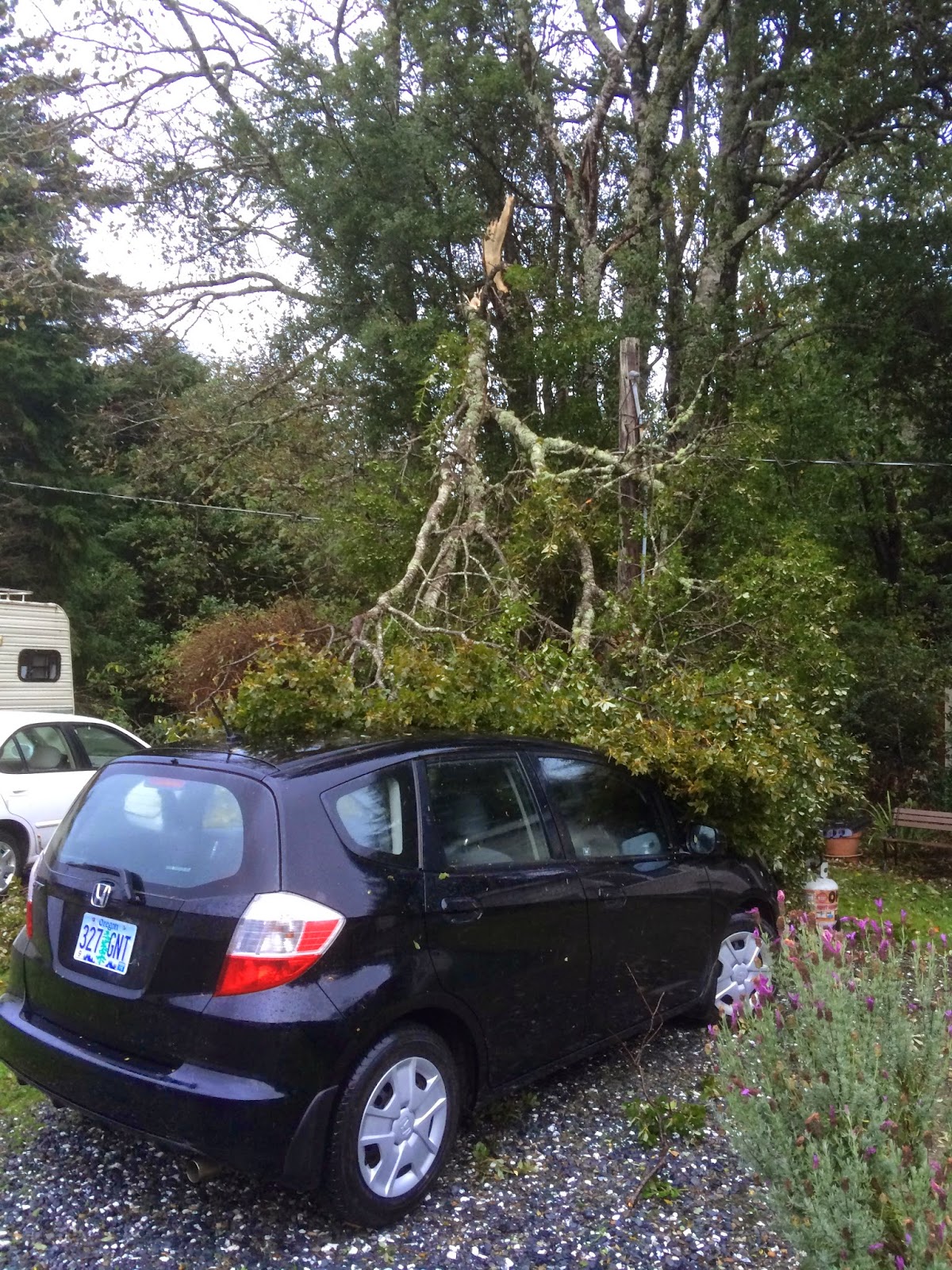 An alder tree branch fell over a car in our park but caused little damage.  Tim and Cindy made short work of the branch with a chainsaw.

Dangerous conditions prevented me from taking more photographs during the peak of the storm.  I made one early attempt at driving to the dock, but the high velocity rocks from a nearby cliff, high storm waves, intense wind and blowing debris deterred the effort.  A fair degree of caution trumps newsworthy photos any day in my book!

In contrast to Saturday, the next day dawned bright and clear along the coast.  During the morning hours we made a short tour of the town and port to watch the clean up already underway.  Except for the damaged RV park and port area, very little evidence of the powerful storm remained.

Sylvie, one of Juanita's Facebook friends, visited us Sunday afternoon with one of Luna's daughters from her second (and last) litter.  She arrived with her family and another pooch that they recently rescued.  Luna and her "puppy" Molly Brown played around for a bit in the park dog enclosure.   The rescue dog, Mike, played along as well, but Abbey had very little tolerance for the canine festivities and soon demanded to be removed from the enclosure.  What a stick in the mud! 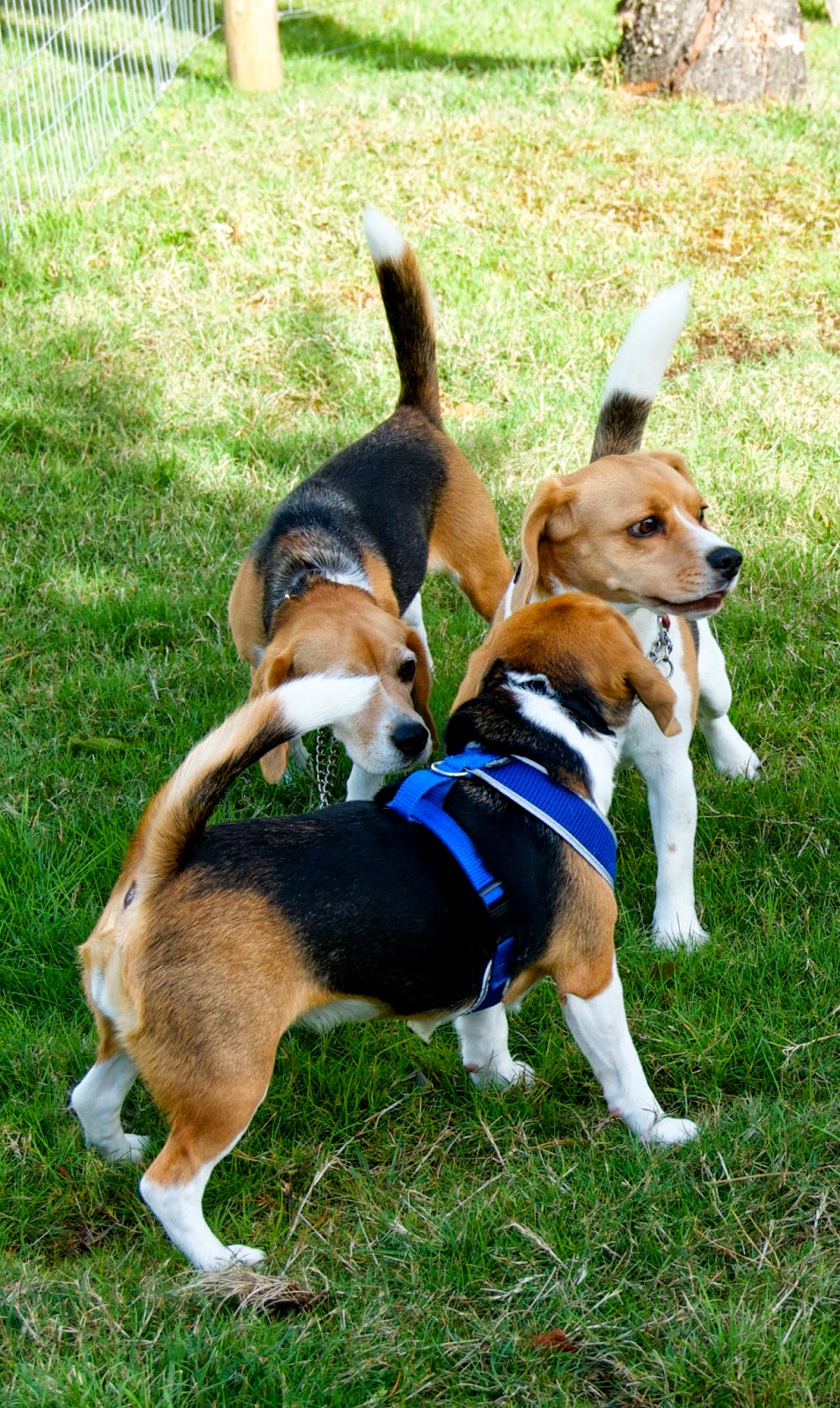 A cluster of Beagles!  Molly Brown is in the foreground with Abbey to the right background and Luna on the left. 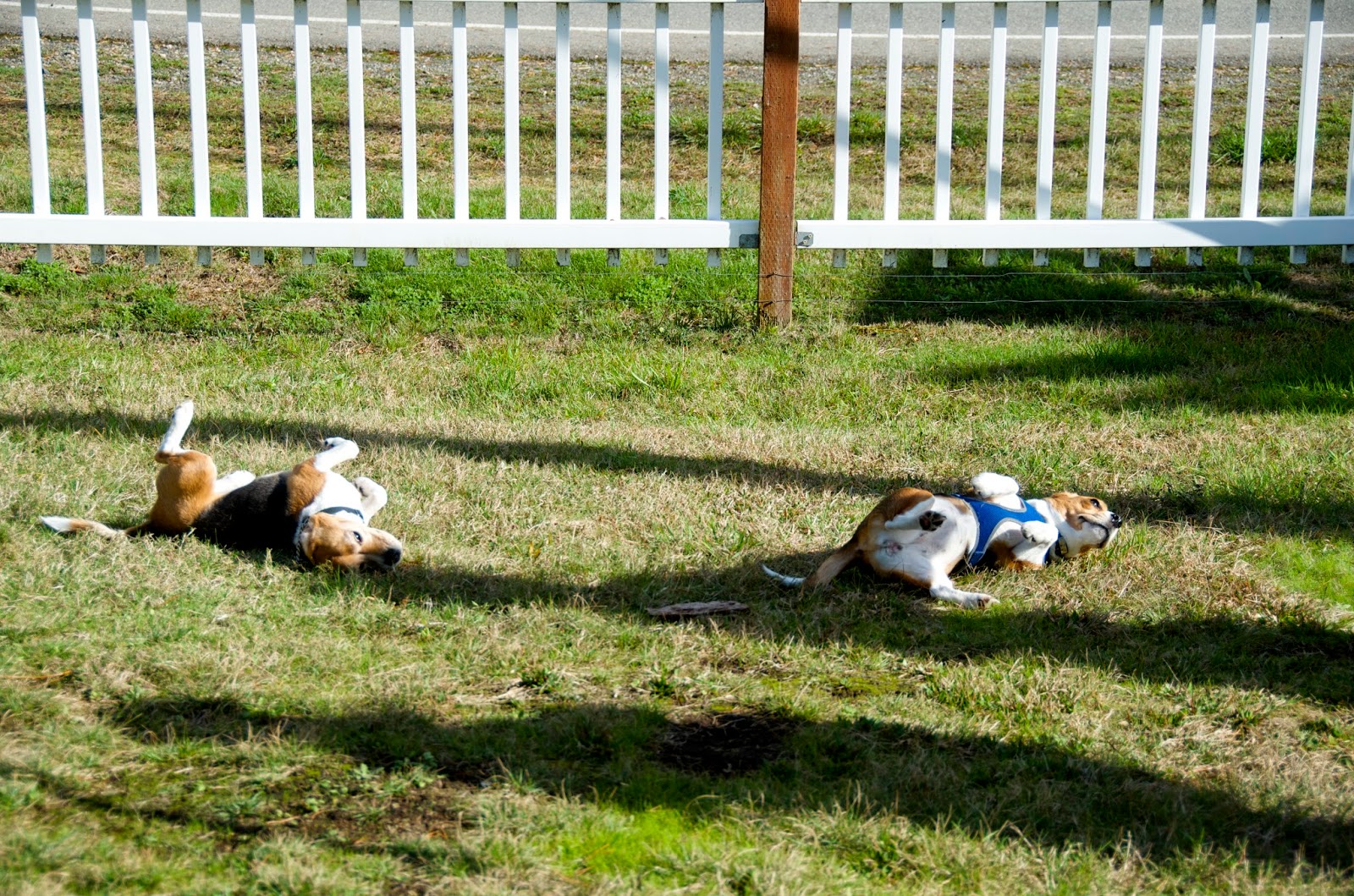 Mother and daughter Beagles having a nice family roll-in on the wet grass.


We have received just over 8" of badly needed rain during the past week and more is on the way this week.  Local rivers are beginning to run and hillside grass is turning green.  Hopefully, the long dry conditions have been replaced by a wet cycle.  Only time will tell.
Posted by Unknown at 11:29 AM 2 comments:

As you can assume by the title, my dear wife has retrieved her sewing machine from the electric hospital and all is well again.  The tensioner...whatever that is...had to be replaced.  Juanita was also happy to find that her machine was still on warranty.  The repair cost nothing except mental anguish.

A series of small to moderate fall storms have arrived on the southwest coast of Oregon giving us much needed rain and completely breaking the fire season.  Rivers and creeks have yet to flow at any appreciable rate but might start after the week ahead.  A small storm is forecast for tonight and tomorrow with a much larger event due on Wednesday.

The camera stabilizing device for my quadcopter arrived several days ago.  I was able to install and make a brief test flight but nearly constant wind has kept me grounded since.  I hope to make and post  some interesting videos from my flying camera platform soon. 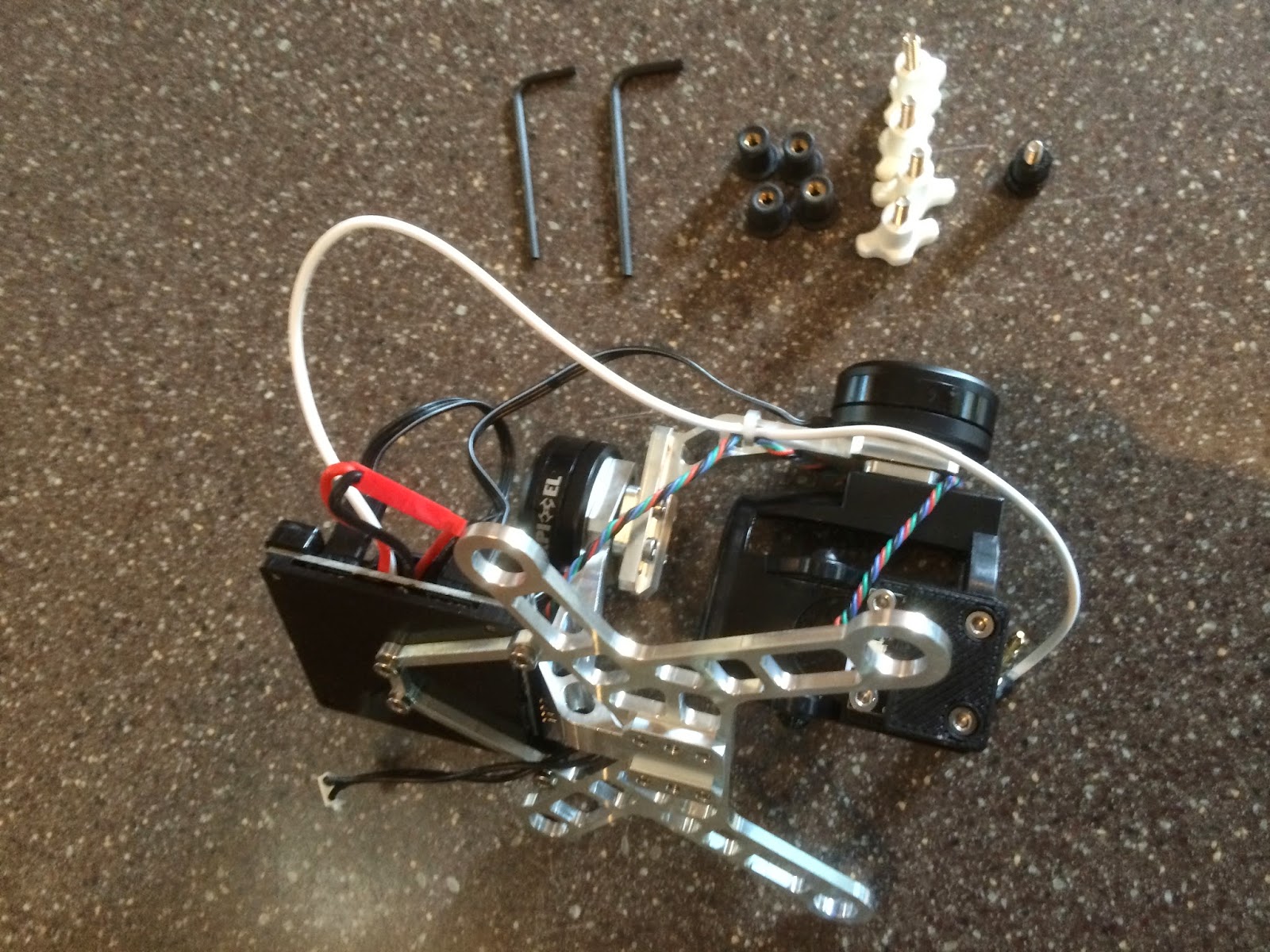 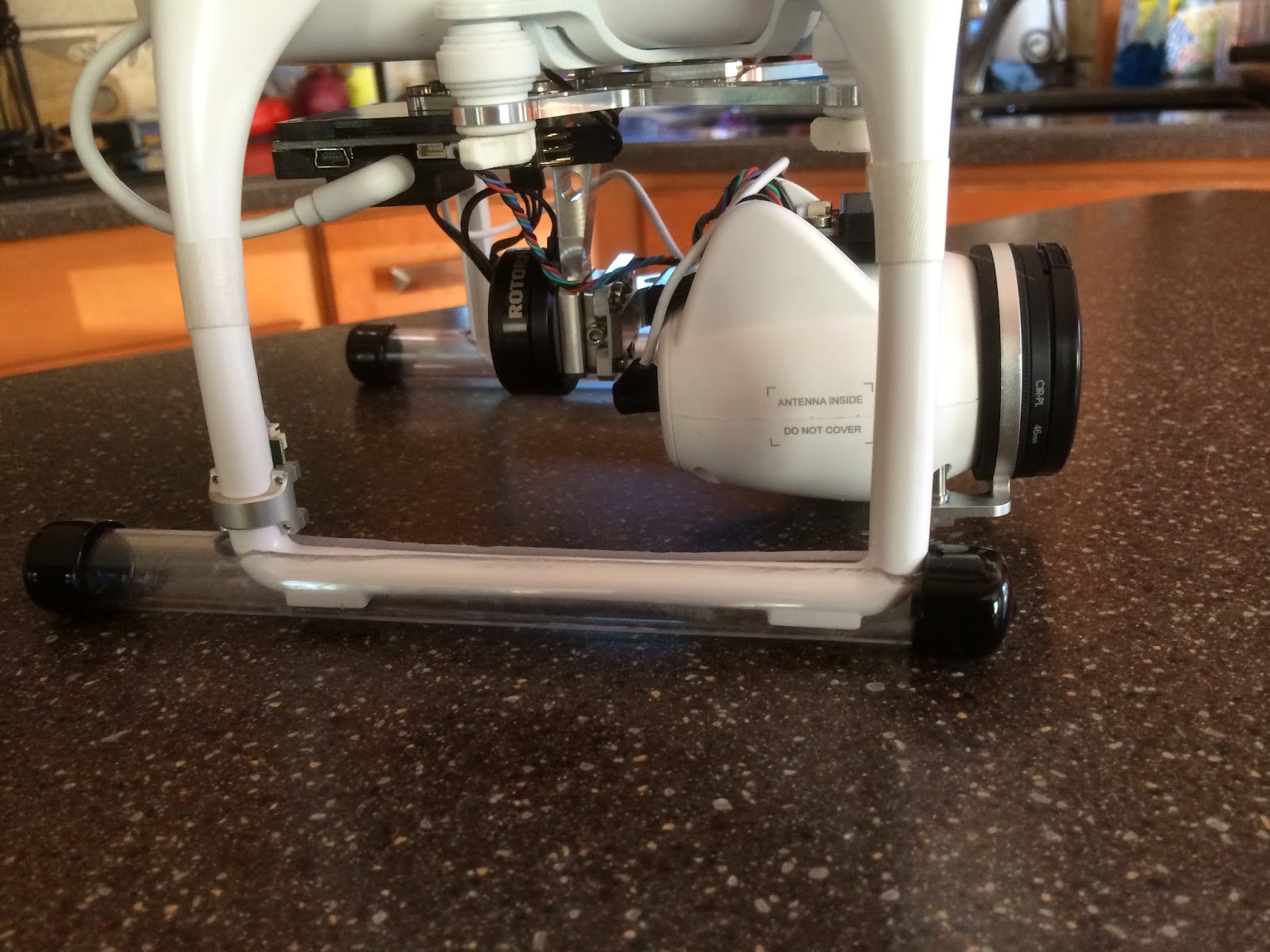 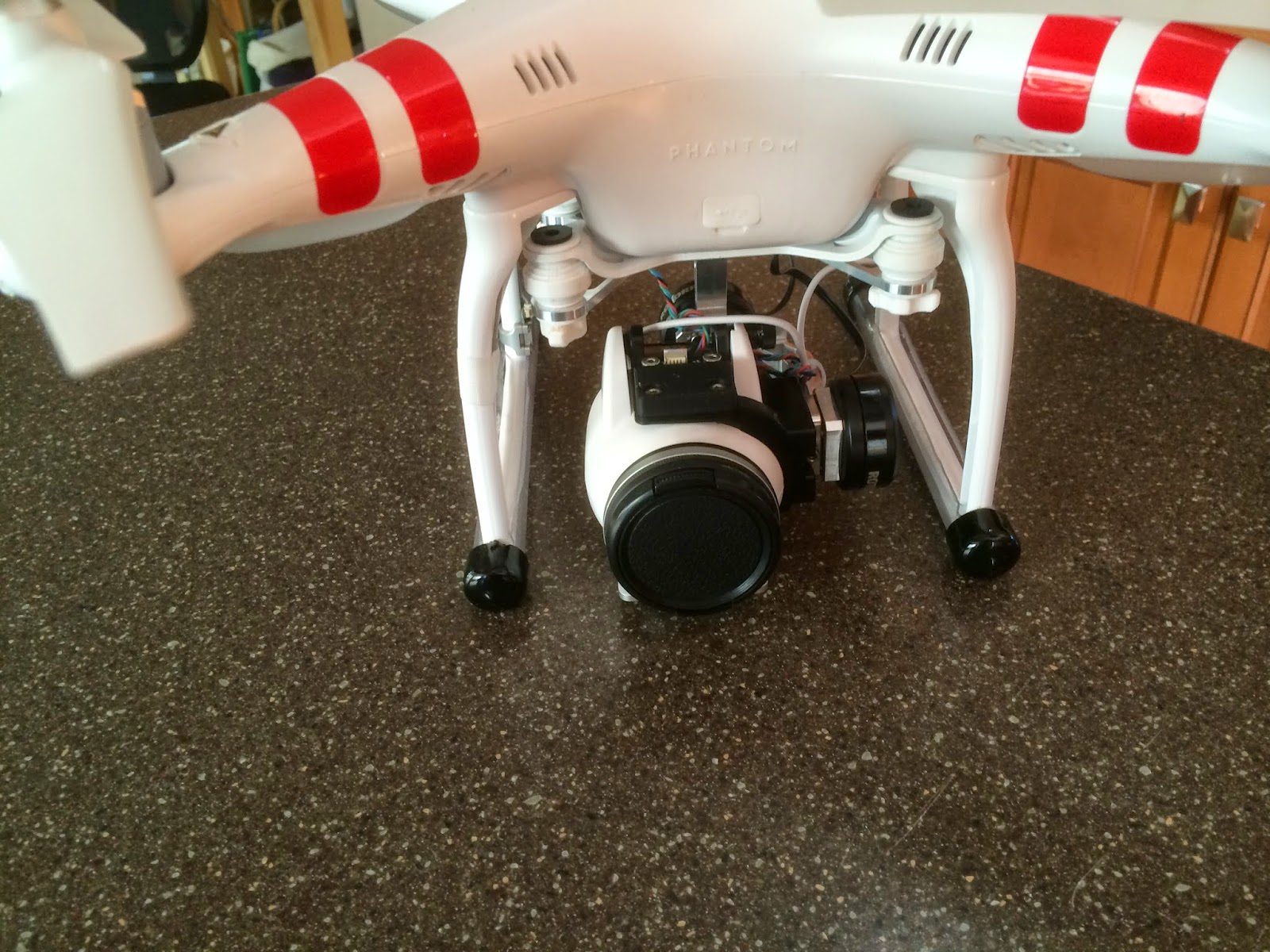 The Rotorpixel gimbal from Canada was easy to install and will add some stability to the Phantom's camera.


I used a new ground based video camera to make a short clip this week.  The GoPro Hero 4 camera is protected from weather and I plan to use it during winter storms when I can't use the quadcopter camera.

I have been on several fishing expeditions since writing the last blog.  I managed to catch a decent sized Coho Salmon from the Coquille River and landed two limits of large rainbow trout from nearby Bradley Lake.  I smoked all of the salmon and froze the trout for later baking or smoking as weather conditions allow. 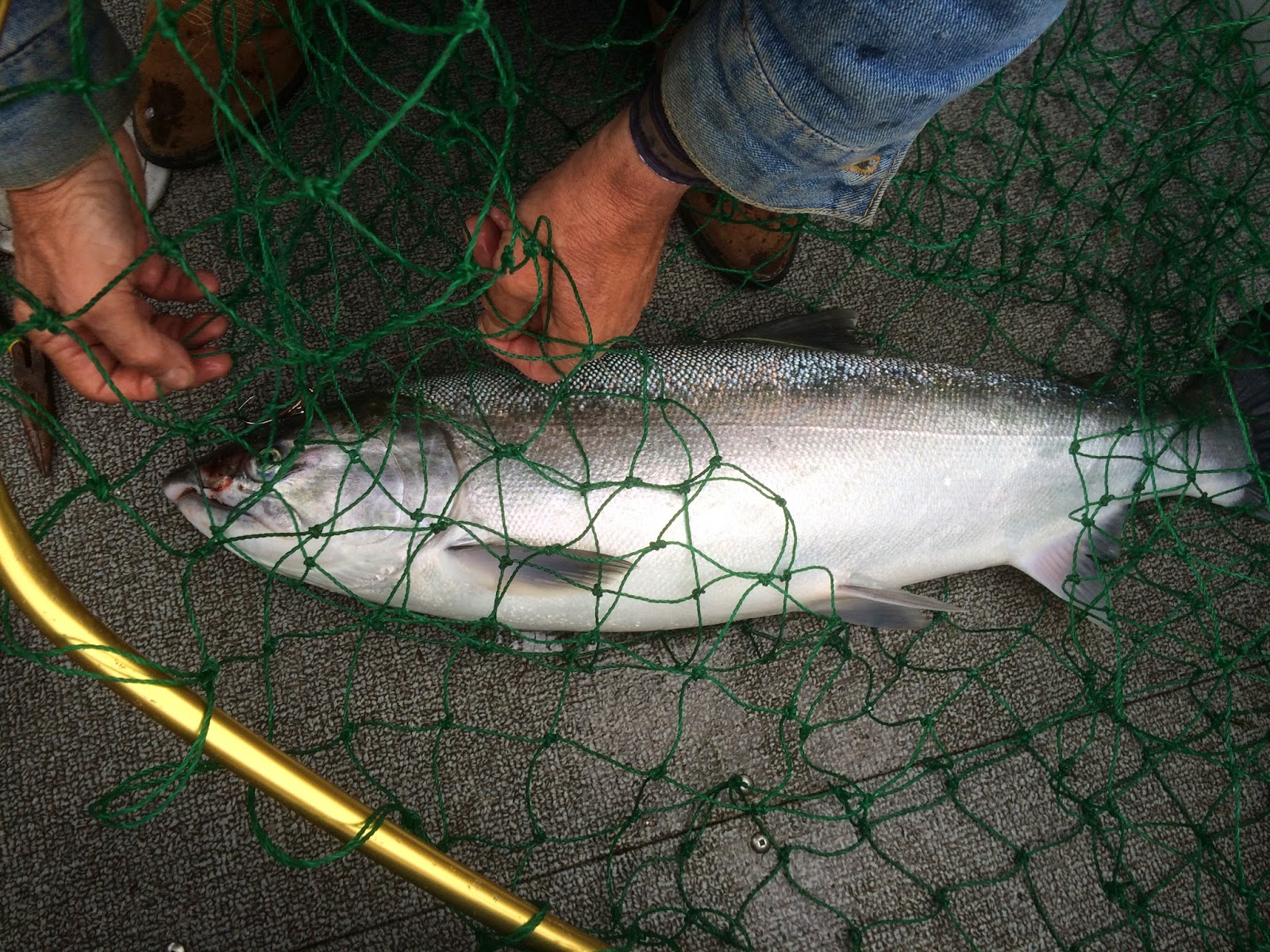 Another salmon from the Coquille. 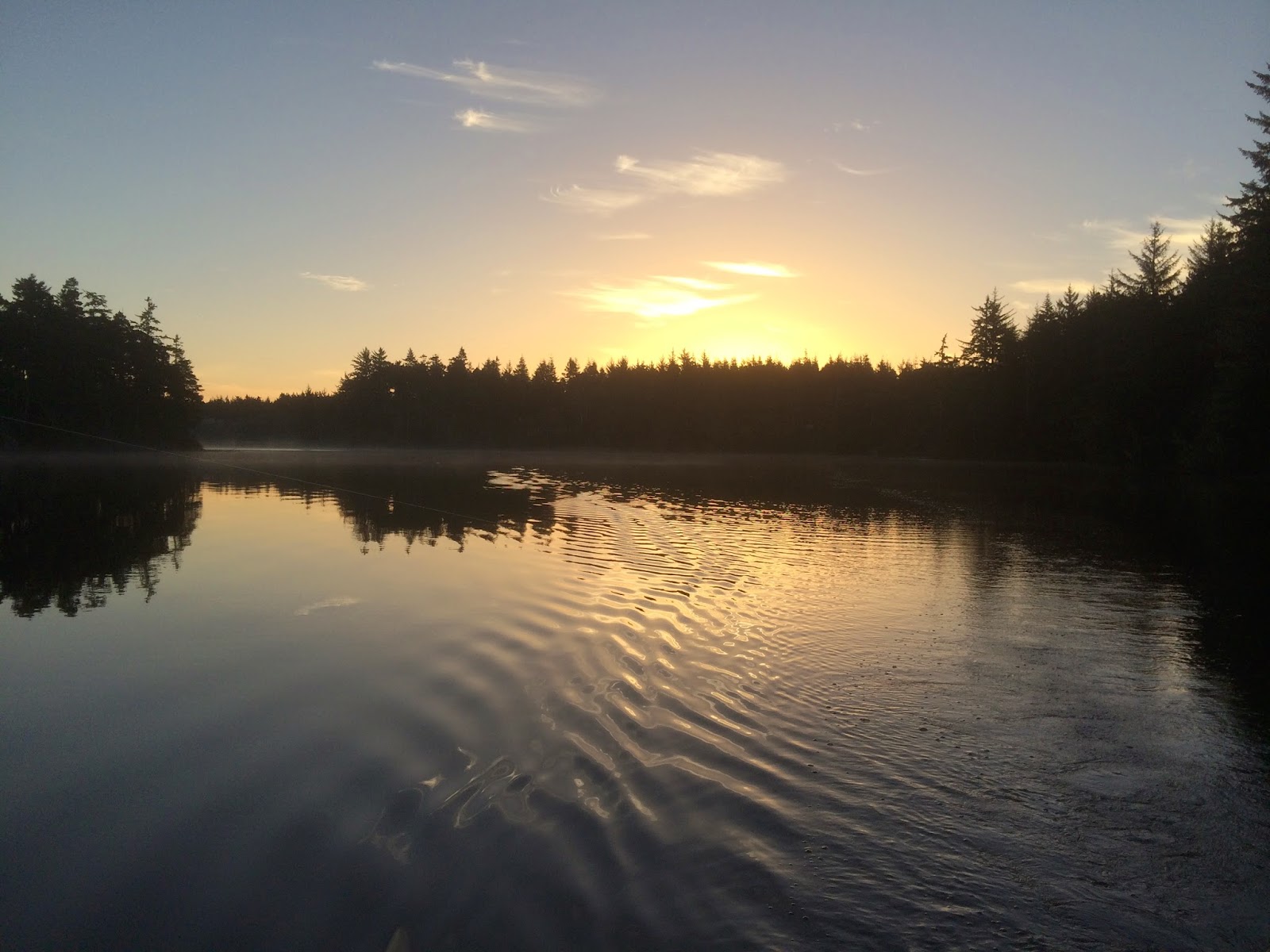 Bradley Lake is small but filled with trout. 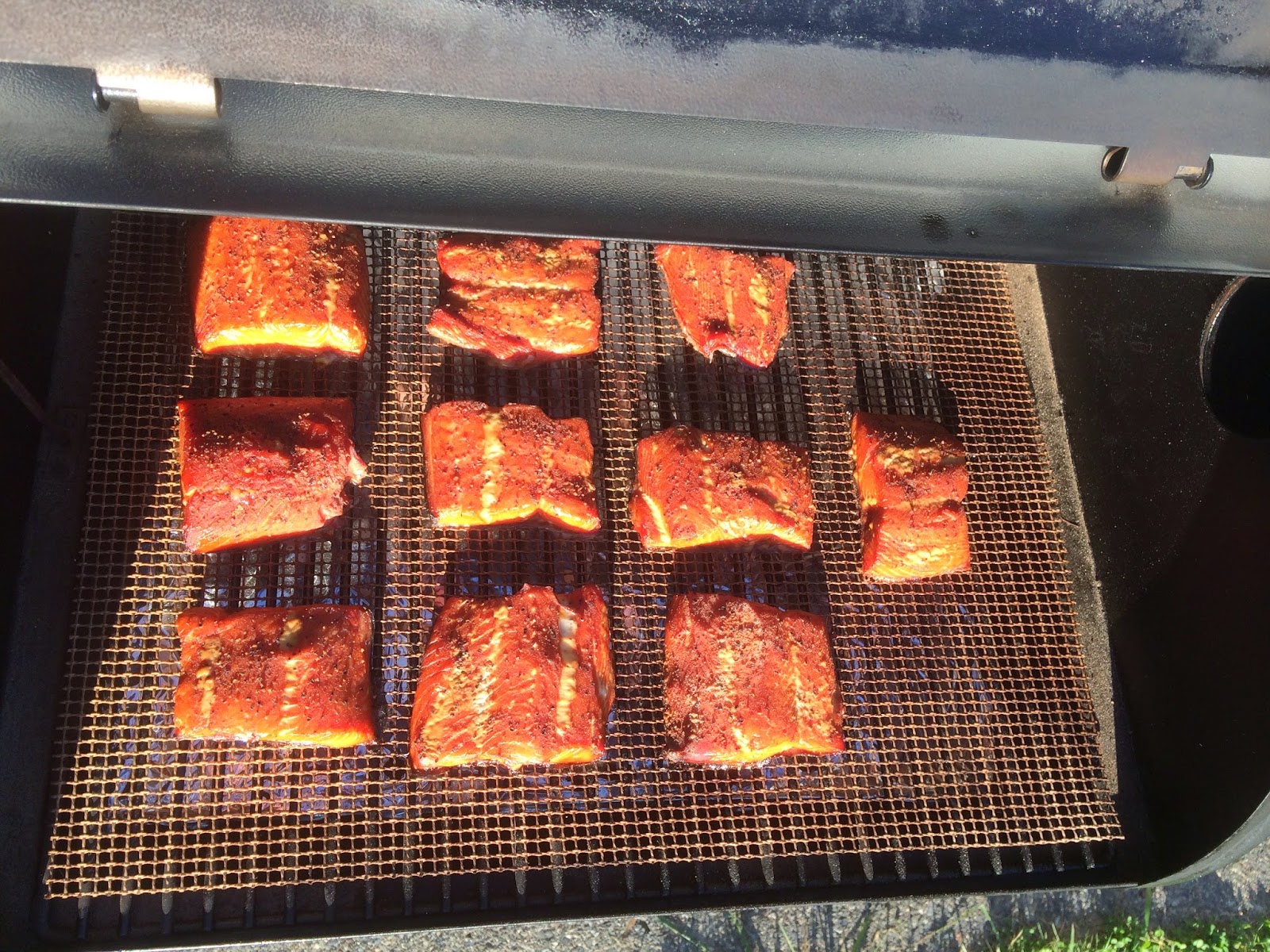 We can't get enough smoked salmon!

It feels somewhat strange staying in Port Orford while all of our summer neighbors head out to various locations in warmer and dryer places.  The center section of the park was full just days ago but has only five rigs remaining as of this afternoon.

Obviously we have mixed feelings about staying here for the winter.  We will miss all of our winter friends in Arizona but look forward to remaining with all of our Port Orford buddies.  Juanita is always happy to be near a great quilt shop and I am looking forward to more fishing and winter storm photo opportunities.

Also, I have to say that, with all the craziness going on around the country, we are just as happy to stay in our small and somewhat remote coastal town.  I doubt that an ISIS terrorist would be able to find the place.  I would imagine that the risk of an ebola infection is minimal here as well.

A bummed out wife

Although the bummed outedness (is that even a word?) was only for a brief time, the occasion was unusual in our little household.  Horror of horrors, Juanita's wonderful sewing machine suddenly  began making a thread rats nest instead of nice neat stitches.  A trip to the sewing machine hospital in Coos Bay was put on the schedule...and, as luck would have it, I was not feeling all that well at the time.

Dear wife without a sewing machine is like a duck without paddle feet.  She has risen from her funk but is just a bit shiftless while waiting for parts to arrive and repairs to be made.  Worst of all, the machine might be in the shop for a while.

Juanita has borrowed a machine from another park guest but hasn't been able to make it work to her satisfaction.  Somehow, she'll make do and the world will be right again.

I managed to pull another nice Chinook salmon from the Coquille River and put it in the smoker after  twelve hours in a brine solution.  The resulting smoked fish was excellent and we even managed to put some in the freezer to enjoy later. 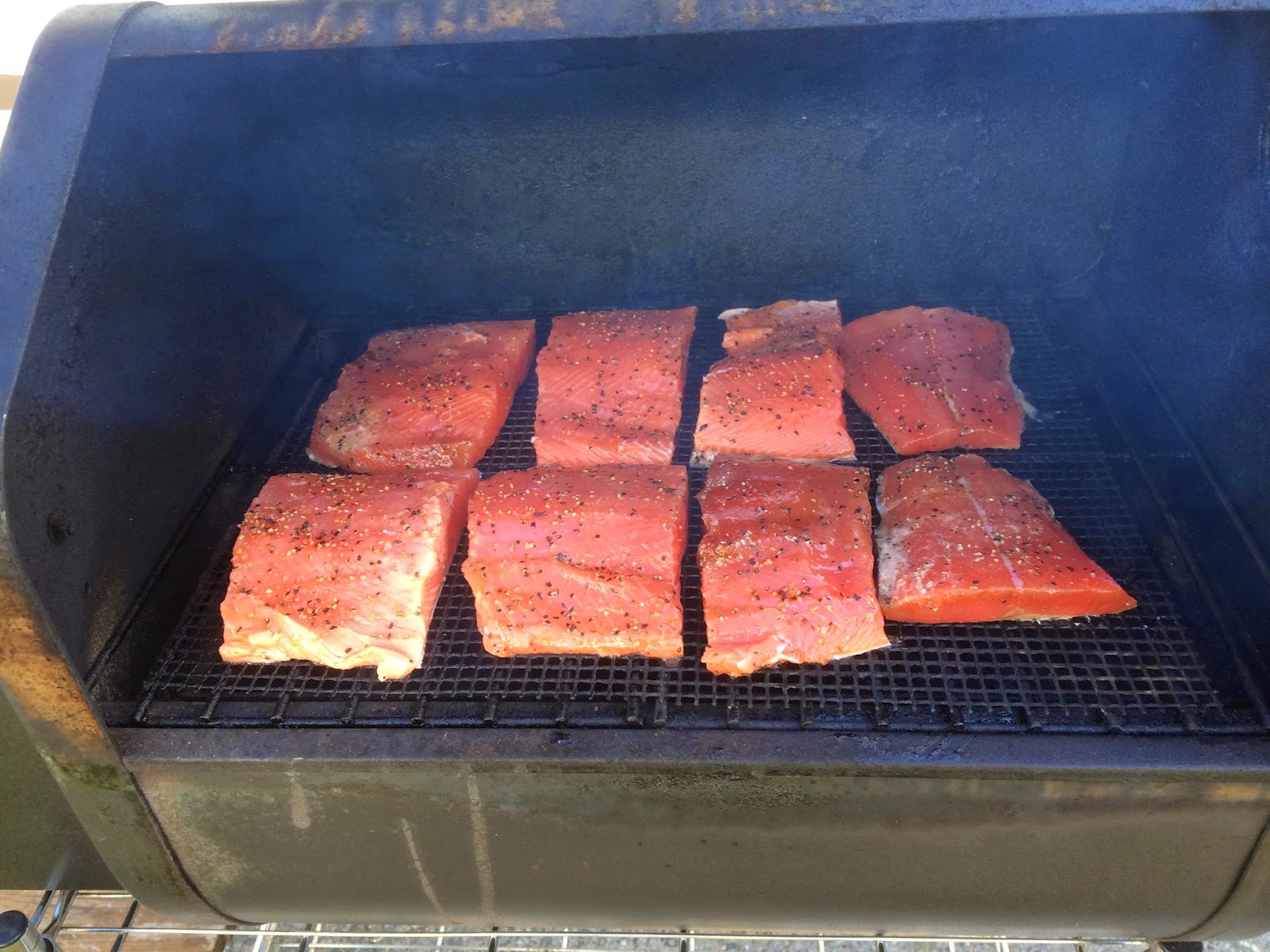 A nice load of Chinook salmon on the smoker.


The new gimbal that will stabilize the video camera on my DJI Phantom 2 Vision quadcopter shipped from Canada yesterday and will arrive sometime late next week.  I am eager to put higher quality video clips on the blog.  In the interim, I have been taking aerial photos of the area and practicing basic flying maneuvers to use when I can resume making videos. 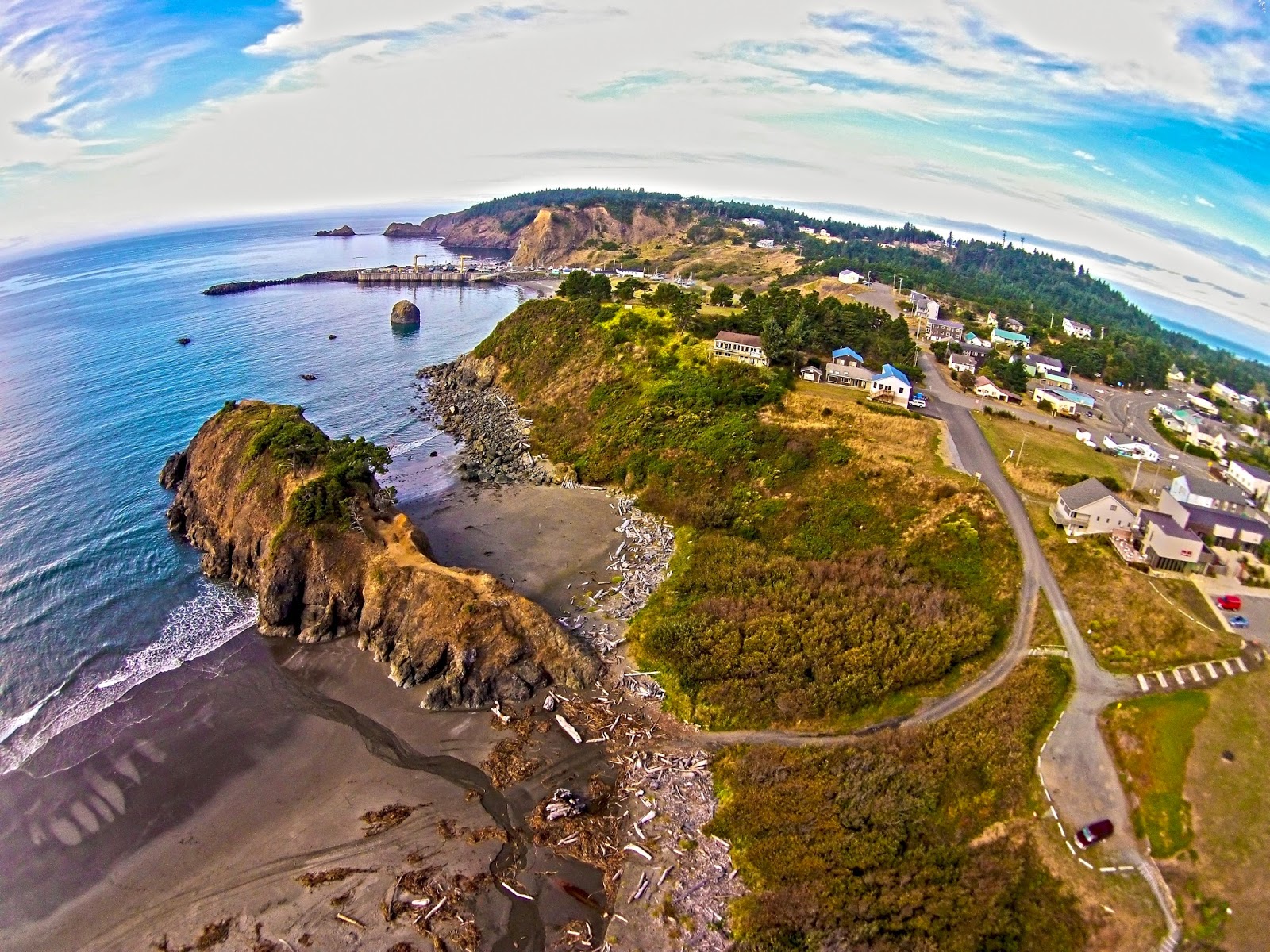 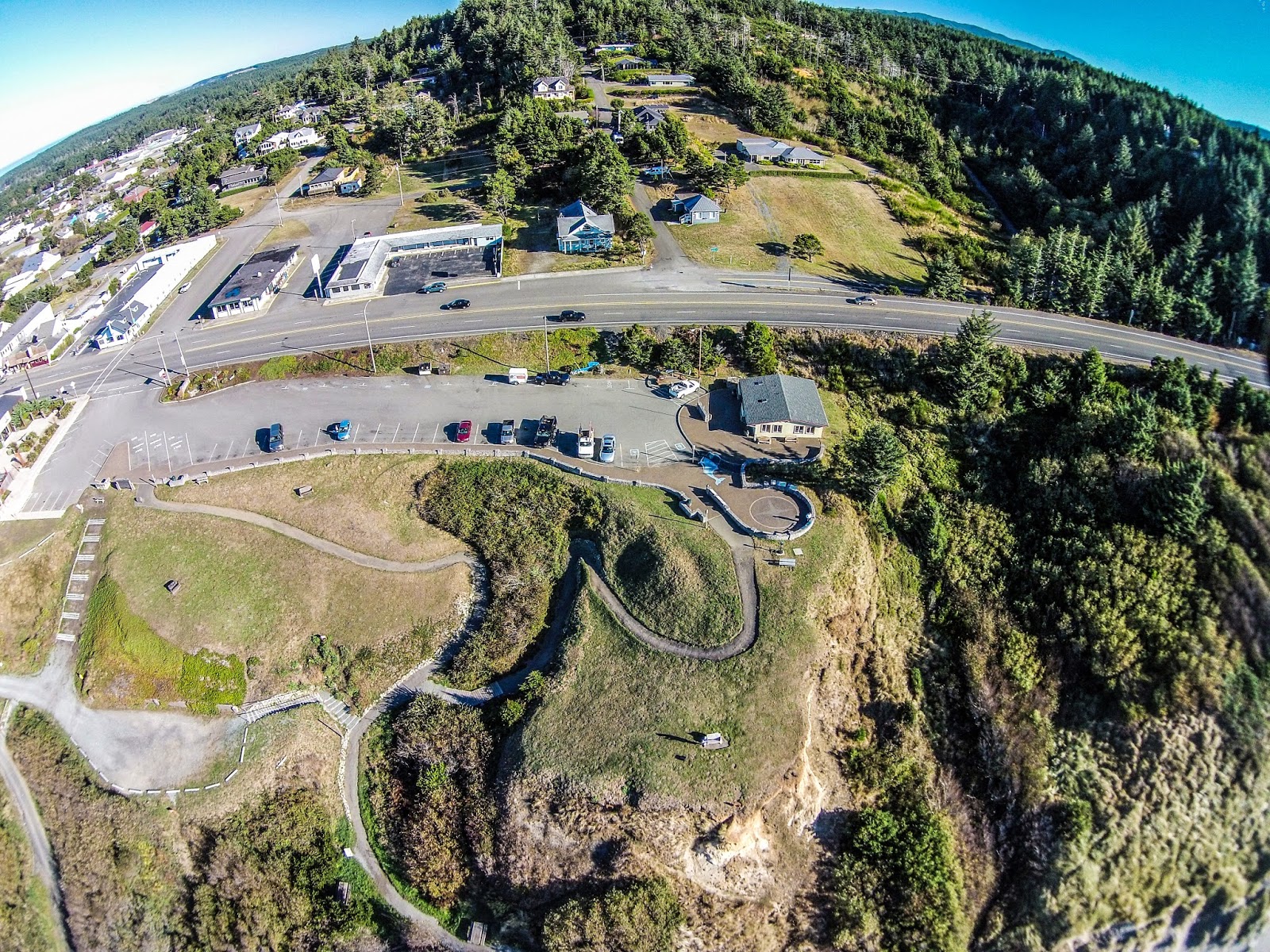 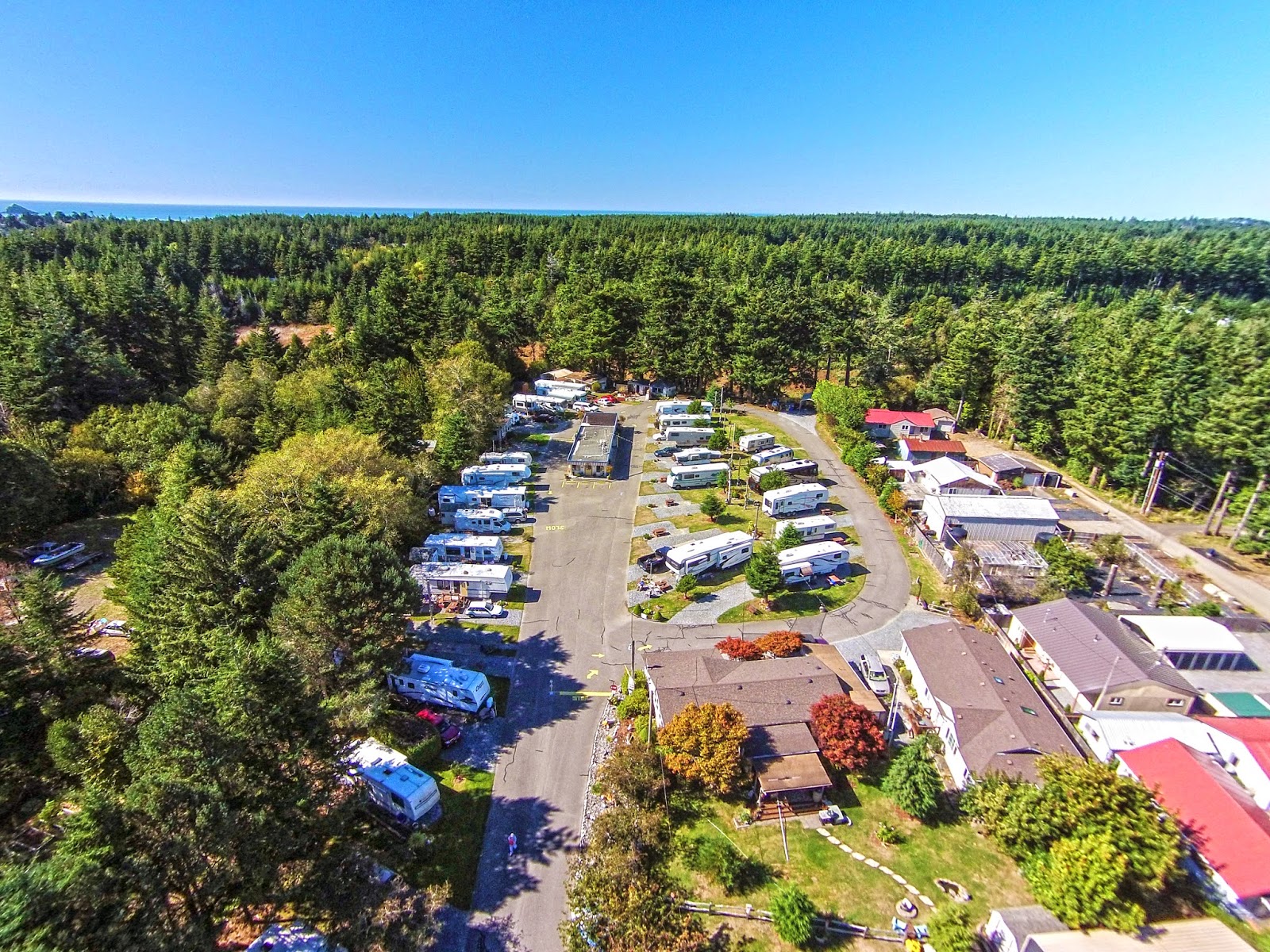 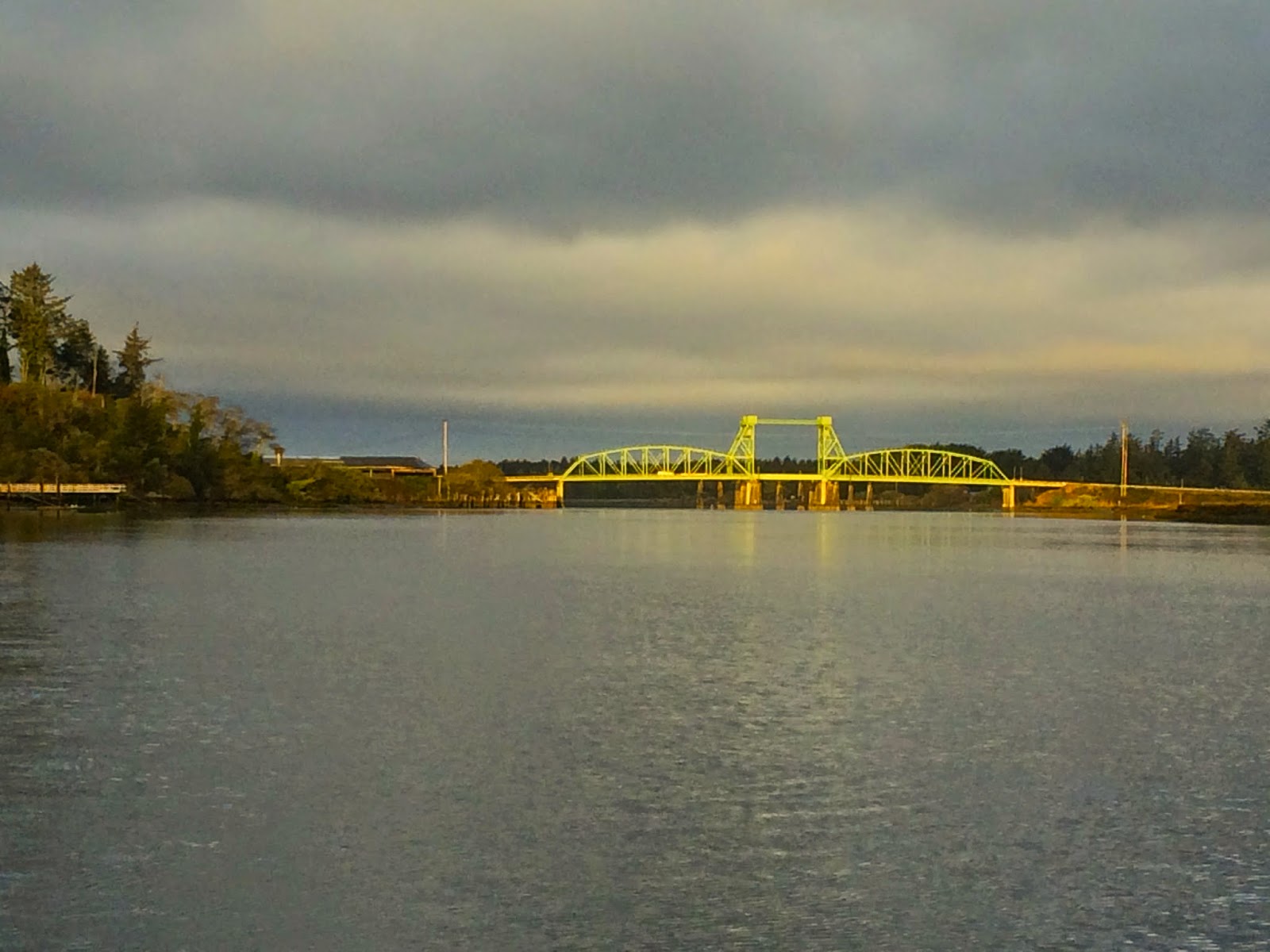 I will join friends again early next week for another fishing expedition on the beautiful Coquille River.  The scenery along the river is enough to make even poor fishing day.  Hwy 101 bridge crosses river just to the east of Bandon. 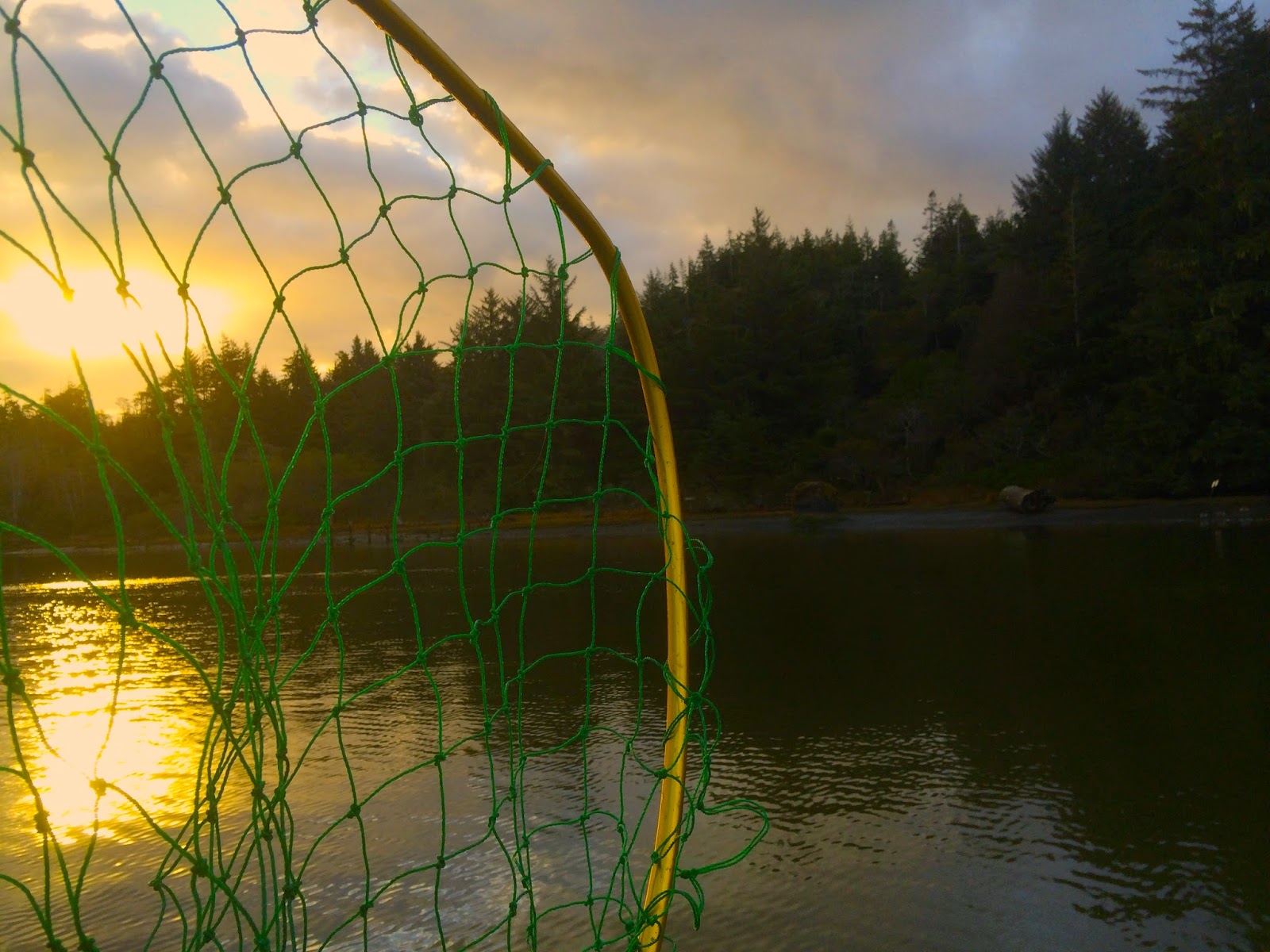 A spectacular morning on the river.

Weather conditions in Port Orford have returned to warm and sunny after the one decent rain storm.  The current dry spell with daily high temperatures somewhat higher than usual in the low 80's shouldn't cause a return to high fire danger.  Mornings are cool and damp with dew enough to keep plant life moist.  I don't see any large rain events in the ten day forecast as yet.  That can always change however.

We are looking forward to spending the fall and winter months here and never know what to expect.  Last winter was very mild in the area with only half the usual rainfall of just over 70 inches.  I don't expect a repeat of that and hope to photograph big winter storms and the resulting huge ocean waves.