Hospitals are no fun!

Well, we have been missing from blogworld for a while now, but we have had a lot on our table.  We have saved all sorts of interesting adventures for this blog post and it will be somewhat longer than usual.

When I last checked in, we were anticipating the immediate beginning of Juanita's chemotherapy treatment.  Well, not so fast folks.  We had a fairly extended wait to get a second opinion from wifey's Arizona oncologist, who initially didn't have all the latest information to work from.  Once she had all the details, she fully agreed with the oncologist in Coos Bay, who had also gone out to get one more opinion from another oncologist.  Since we had three independent sources on board for the proposed treatment, we felt confident enough to proceed with everything.

Juanita had an 8 AM appointment on Oct 19 to have the infusion port surgically implanted in her upper right chest.  The appointment was changed twice that day and we ended up checking in at the short stay facility at Bay Area Hospital in Coos Bay at 1 PM.  As usual for such medical issues, she didn't move into the operating room until 3:30 PM.  The surgeon arrived in the waiting room about 45 minutes later to report a successful implant and told me Juanita would be ready to go in about an hour...not!!

It appears that my dear wife is very sensitive to anesthesia.  The brief encounter with a moderate dose of the stuff left her terribly nauseous for several hours and made her the last patient to escape the short stay ward at the hospital at nearly 8 PM.  Since she had been fasting prior to the surgery and had nothing to eat or drink afterwards, she was really needing something comforting to eat.  What is better than ice cream?  While on the way back to Port Orford,  I stopped by DQ in Bandon and picked up a cup of the frozen stuff.  She was happy with that and actually slept for the remainder of the drive home.

We made the 105 mile drive to Roseburg on Sunday to drop our two Beagles Abbey and Luna off with their breeder, who very kindly offered to care for them while Juanita spends a week in the hospital to receive her first series of chemo treatments.  They were going to have a good week at doggie camp in Medford.

Juanita checked into Bay Area Hospital at 8 AM on Monday morning with bags full of comfortable lounging clothes, several iDevices and one of her beautiful quilts.  She was assigned a rather comfortable (for a hospital) private room on the 4th floor of the new hospital wing.  Despite the cause of her visit, it was apparent that she would be fairly comfortable. 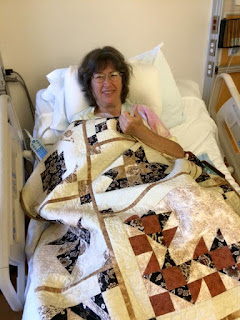 By 10 AM, she was hooked up to IV saline solution and prepped to receive her first infusion of four to take place during the week.  We knew the game was on when two nurses showed up in "spacesuits" to connect the first chemical bag to the ever present IV tree.  Let the juices flow!

Other than a considerable amount of pain when the newly installed port was accessed the first time, Juanita had very few effects from the first infusion.  About an hour into the process she experienced an "odd" sensation in both hands.  The capable nurse staff kept a close eye on the situation and the sensation soon passed.  We were amazed, in fact, that the process seemed to have little effect on her.

The first treatment was very slow and lasted just a little more than five hours.  During the process, wifey ordered a good meal from the fairly extensive menu, talked with a few family members on the phone and tapped away on Facebook.  Like any first rate hotel, the hospital had excellent Wifi.

While Juanita was having her first treatment, I passed time reading my Kindle, keeping friends and family posted on Facebook and continuously helping my dear wife unhook and reconnect the power cables from the IV tree for the frequent (every 20 minutes or so) trips to and from the small bathroom.  A constant IV drip puts a lot of fluid through the system and we soon realized that this was going to be our exercise for the week.

Because the chemo was removing a large number of cancer cells from Juanita's blood, fluids in and fluids out had to be closely monitored.  I made a mistake the first day of throwing away one of her empty water bottles and was firmly reminded by a nurse that they had to be counted at the end of each day to confirm that the in/out process was going well.  Oh well, my bad! 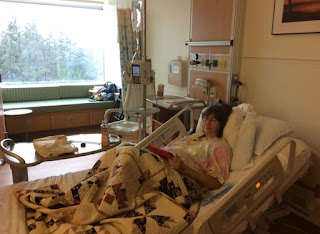 Tuesday, Wednesday and Thursday went pretty much the same, with only minor differences to mark each passing day.  I usually arrived at about 9 AM each morning and left at about 5 PM in the afternoon to avoid the nighttime drive back to Port Orford.  I really don't like driving the two lane coast highway at night.  Too many drivers have no idea that high beam headlights cause issues with opposing drivers.  I must have seen all of them during my only night drive south on Tuesday night.  Juanita made sure that I didn't repeat that departure schedule.

My dear wife did very well during the entire process.  Her only emotional crash came early Tuesday morning and was probably caused by the drugs.  Unfortunately, Tuesday was my only down day and it took both of us a few hours to pick ourselves up for the rest of the adventure.  We did.

The 4th chemo infusion was fairly light and finished by noon.  Not long after one of the fine nurses entered the room with two beautiful root beer floats so we could toast the completion of the treatment cycle.  Although we were happy to reach this point in the process, it was necessary for wifey to spend 24 more hours in the hospital for observation and continued saline drip. 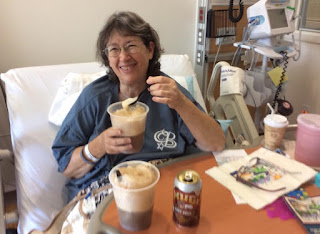 Friday was happy dance day....after an injection of Neulasta to keep Juanita's white blood cell count from crashing during the following week, we packed up and made our fast escape...in a wheel chair of course.  We were free!

All in all the experience was better than I expected.  Juanita's doctor, the nurses and the hospital staff were all first rate and the facilities were clean, modern and comfortable.  Even at that, we are happy that we shouldn't need to revisit the place until my dear wife gets the port surgically removed after the treatment ends.

Additional chemotherapy treatments will be scheduled every 28 days and will consist of two days of outpatient infusion at a cancer center located near the hospital in Coos Bay.  Juanita needs to have blood tests run every Monday at Southern Coos Hospital in Bandon.  We have been told to expect up to five more cycles or fewer if anticipated results occur at an earlier time.  We would be very happy to see fewer cycles as you can imagine.

Before departure from the hospital we were given a book with all sorts of side effects listed that might come up sooner or later in the process.  These side effects are shown from probable to rare and require various responses from us if they arise.  While kicking back and relaxing on Sunday, one of these issues became evident...Juanita had developed a more and more frequent dry cough and I took her temperature to see if we had a problem.  We were told to report anything over 100.5.  She was showing a 101.8.  We made a call to the doctors office and, hearing nothing in a half hour or so, decided to make the drive to the emergency room at Southern Coos Hospital in Bandon.

Juanita was checked in and immediately had two blood tests, an x-ray of her lungs and other fluids taken for lab analysis.  Four hours later all the lab reports came back clean and the elevated temperature had subsided.  The high number was probably related to the mix of meds in her system and not caused by an infection.  The oncologist on call in Coos Bay cleared our departure and we arrived at home early enough for a decent dinner.

Monday was pick-up-the-hounds day in Medford.  The round trip was nearly 400 miles and made for a very long day.  We were happy, however, to have our little therapy Beagles back with us.  Luna was immediately doing her usual clown dog act, but Abbey (part cat we think) pouted for hours before letting us know she was happy to see us again.  Weird dog! 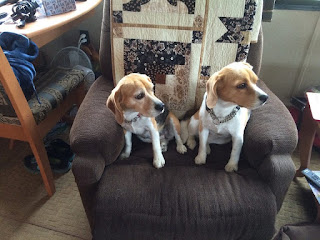 We needed to make one more trip to Coos Bay yesterday and had a short (three minutes!) visit with Juanita's surgeon for a post-op check up.  We did a little shopping while we were in town and returned to Port Orford to stay a while...we hope.

As of this evening, Juanita has experienced no side effects other than the brief episode on Sunday.  She is in good spirits and confident that the treatment will take care of her issues.  In fact, she has already noticed that a lymph node that has been very noticeable on the right side of her neck for three years is completely gone.  Even the nurses couldn't find it.  Yahoo!!

We are looking forward to a week of quiet, rest and fun times with our two furry companions and will check back in with you soon.............
Posted by Unknown at 9:11 PM 12 comments: